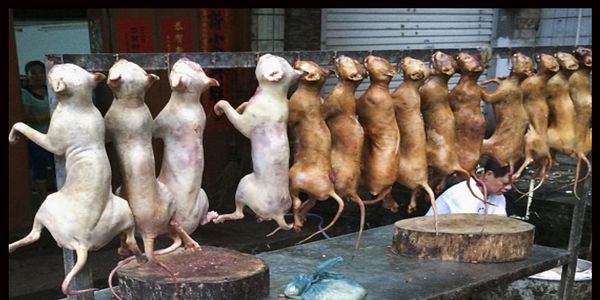 Although the tradition has been around for a long time, it was not until 2009 that dog meat traders pushed it to make this festival an annual celebration. Many people eat dog meat because they believe it will keep them cool during hot days and keep off evil spirits. Therefore, people continued to do it without knowing the damages that they are creating.

The Yulin Dog Meat Festival plays a huge role in a food safety issue. “Most dog meat currently on the market doesn’t have a legal certificate,” says Li Weimin, a lawyer based in Beijing who has worked on the legality of dog meat.” Not only that the dogs sold on the market are uncertified and sicked animals, but the dogs also suffered from severe conditions during the transportation to Yulin. “Our ground team has already spotted trucks carrying stolen dogs entering the city,” said Ching, who will also be working during the festival to identify illegally sourced dogs protected under Chinese law." According to Ching, most dogs were not given food and water during the journey and may carry diseases with them. It is tragic when people who consume dog meat end up getting those diseases. It is very crucial to be aware of the cause and effects of the situation.

The Dog Meat Festival begins in June and lasts about ten days. “According to Humane Society International, around 10,000–15,000 dogs are consumed in this festival.” A large percentage of these dogs come from stealing pets, capturing strays, and raising in dog farms. During the cooking process for the Yulin festival, these dogs were killed in inhumane ways, including being hung, skinned, and tortured alive.

Animal welfare activists are trying very hard to get this event banned. “We have spoken with several people working within the mayor’s office, the food and drug administration and the municipal building and no one seems aware of a Yulin festival ban,” said Jason Baker, Vice President of International Campaigns at PETA.” However, the government of China keeps on looking for other ways to get away from this. Although the government of China refuses to end this festival, people like us have put in efforts to stop this festival by creating petitions and protests the festival. There are also people that support this action by cutting down on Chinese manufactured products unless the festival is ban. By spreading the word and applying political pressure, people will be aware of inhumane actions taking place and will step up to make a difference.

Dogs deserve to be treated nicely like the way others treat us. There are so many things dogs do for the good of people. Dogs can be service dogs and emotional companions. They are in every way, giving support to humanity. We should give them opportunities to live better lives. In order to do so, we need to keep pressuring the government of China by boycotting Chinese manufactured products and implementing laws to stop illegal dog trade.

We need 100,000 signatures for this petition. By signing this petition, you are convincing Guangxi’s Autonomous Region’s People’s Congress Standing Committee to end the Yulin festival.