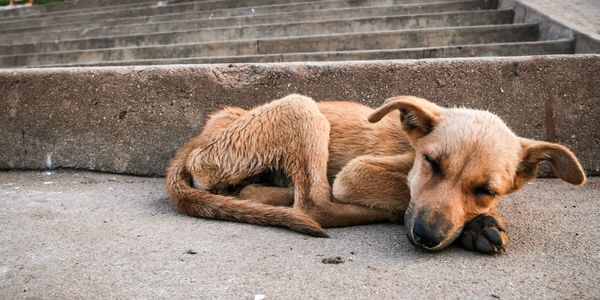 If you've ever had a puppy, or even spent some time with one, you know all too well that they chow down on everything -- your favorite pair of shoes, that history paper you worked so hard on, even dirt and rocks. But for Lou, a sweet two year-old pup in Ohio, eating rocks was a desperate act of survival -- the pup's owner, David Neanover, had been starving him to death. The sweet dog died just five days after being mercifully rescued, and was able to spend his last moments away from the nightmare he had lived his entire life. David Neanover was punished with nothing but a slap on the wrist in the form of a misdemeanor charge after the grand jury refused to charge him with felony animal cruelty.

This is unacceptable. The level of neglect and abuse that Lou went through is astronomical, and must be punished accordingly. Sign the petition and demand that the Butler County's Prosecuting Attorney Mike Gmoser bring Mr. Neanover's case before the Ohio Supreme Court so that he can be punished to the full extent of the law!

The rocks found in Lou's tummy were not even the worst part of his sad condition. Pictures that rescuers took of him are hard to even look at -- he is emaciated and his body language screams fear. Every inch of his body is covered with open, excruciating sores that have clearly gone untreated for a long time. Rescuers said that the sores were even on Lou's tongue, which was half missing. This meant that it was extremely difficult and painful for the pup to eat, even when he was finally given the mercy of real food.

Lou's abuse and subsequent death are not a one-off, like most animal abuse cases. Animal abusers tend to be repeat offenders, often escalating in levels of violence and mistreatment. Studies also show that animal and human abuse are strongly linked. For example, David Neanover has also been charged with domestic abuse. This man is clearly a danger to all living things, and it is an absolute shame that what he did to Lou was considered a misdemeanor. People in the state of Ohio were so disgusted when they heard the ruling, they took to the streets in protest.

This can still be made right. We cannot save Lou's life, but we can save the countless other animals and people that David Neanover could hurt. Please sign the petition today and ask Mike Gmoser to bring this case to the Ohio Supreme Court, and charge David Neanover to the fullest extent of the law.
Sign Petition
SHAREShare this petition with friends!TWEETEMAILEMBED
Sign Petition
See more petitions:
You have JavaScript disabled. Without it, our site might not function properly.