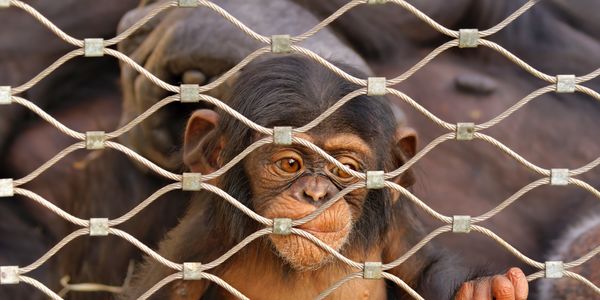 Chimpanzees are an endangered species. In fact, there are only 200,000 of them left! Yet, these animals continue to be widely trafficked, poached and have their habitats destroyed. Such was the case with a young chimp named Caliado, who was rescued from traffickers by the NGO WildAtLife -- but only after he saw his entire family be slaughtered by his captors.

The Convention on International Trade in Endangered Species (CITES) is supposed to be regulating global wildlife trading in order to protect animals that are part of endangered species, like Caliado. We must demand they actually do this and prevent even more tragedy!

Caliado's rescuers say they found him in a tiny, dirty cage and that he had signs of having been tied up, with rope burns on his skin. Fortunately, once the rescuers had him in their custody, they were able to give him the appropriate medical care and he appears to be recovering.

There's a reason Caliado was tightly tied and locked up. Baby chimpanzees are worth thousands of dollars on the grey market, which is why poachers are so eager to get their hands on them! Recent investigations have shown that chimps are being illegally shipped out of Africa at alarmingly high rates. Smugglers get away with it by exporting them under the guide of supposedly legal exports to zoos. But we need to crack down on this!

It's projected that the world population of chimpanzees is going to decline by 80% in just the next 30 or 40 years, leaving only 40,000 wild chimps alive. That's why we need to protect them! No animal should suffer the way Caliado the young chimp has.

Please sign the petition to ask CITES to do their job and protect chimpanzees!