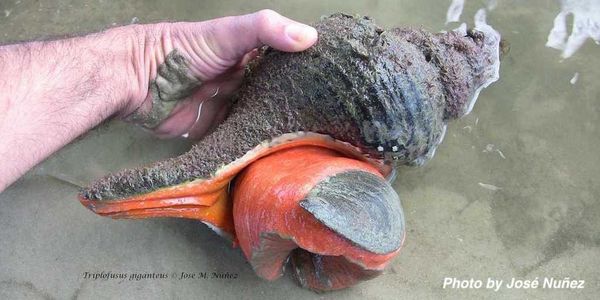 The Iconic Florida Horse Conch Is on the Brink of Extinction!

Florida horse conches are one of the world's largest invertebrates. In fact, the record horse conch was a whopping two feet long! They are marvelous creatures, capable of prolific reproduction. Some of these Florida natives give birth to as many as 28,000 offspring in a single year! But this iconic species, and the state shell, is at higher risk of extinction than scientists previously understood. Now, conservations are scrambling to encourage the state of Florida to act quickly and grant much-needed, immediate funds to the Fish and Wildlife Conservation Commission. The clock is ticking, and every dollar towards conservation efforts counts.

Sign now to show you support funding the Florida Fish and Wildlife Conservation Commission to do research to save the Florida horse conch!

Unfortunately, like many invertebrates, research on their protection and conservation is limited. For many years, scientists believed the shells could live up to half a century, but recent studies show they only live for about 10 years. They also don't start reproducing until after age 6 -- meaning even though the conches give birth to thousands of offspring, many do not live long enough to reproduce. This research has been vital for scientists to better assess the species' risk, and demonstrates just how dire things are for the Florida horse conch. With live collection and commercial harvesting becoming increasingly common, time is running out for this mighty invertebrate.

The best way to protect this beloved, iconic species is to give scientists funding to better study the invertebrates and make a conservation plan. The Florida state legislature could do this by simply granting the Florida Fish and Wildlife Conservation Commission funding to protect the Florida horse conch. Sign the petition now to put pressure on the state legislature in Florida to do the right thing and save a species on the brink of extinction!
Sign Petition
SHAREShare this petition with friends!TWEETEMAILEMBED
Sign Petition
See more petitions:
You have JavaScript disabled. Without it, our site might not function properly.

Care2
The Iconic Florida Horse Conch Is on the Brink of Extinction!
SHARETWEET