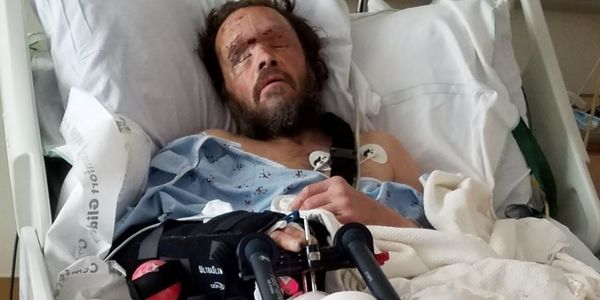 Am I Not My Brother's Keeper? Personal Blog by Catherine J. Rippee-Hanson

"We've lost our compass." For California's most visible mentally ill, is a return to forced treatment a solution — or a false promise? by Jocelyn Weiner, CalMatters.org

After accident they warned about, sisters of mentally ill man blame the state — and beg governor to act

My brother, James Mark Rippee, (above) who is blind, brain-damaged from a traumatic brain injury (TBI), physically disabled, and has Schizophrenia and Anosognosia. (Lack of Insight to his own serious mental illness.) He has been homeless for 13 years living on the streets of Solano County in California.

I previously authored a petition two years ago in support of AB 1971 in California - legislation that was pulled by the authors after I garnered 82,000 signatures through my petition which was hosted by Care2, due to "poison pill" amendments forced into the Bill to change the definition of "Gravely Disabled" to include "lack of capacity and medical need" as a criteria for involuntary treatment and placement or LPS Conservatorship.

I had made my brother the face of that bill. After continuing our efforts to get him help, services, treatment or placement and failing with our County of Solano in California who have been negligent in their duty to start an LPS Conservatorship Investigation and process, and denial of participation with Laura's Law, and even denial of Mental Health Services - We continued to speak at Solano County Board of Supervisors' meetings and inform all County officials, Health & Human Services, Social Services including Adult Protective Services that he was in danger - in particular to being struck by a vehicle or causing an accident because he literally has no eyes.

In September of 2019, he once again fell into traffic and was struck by a car. Because he has anosognosia and is not of sound mind, when EMTs were called to the scene - he denied needing help and was left on the sidewalk -injured, in pain and crying.

Eventually, he was found by our family two weeks later with life-threatening injuries sustained in that accident. He had emergency brain surgery and was in the hospital for 3 weeks. Although clearly delusional the psychiatrists there refused to declare him with diminished capacity which would have resulted in a 51/50 hold. Even though they would not place a hold on him for his own protection - although they did continue to inject him throughout his stay with antipsychotic medications.

Upon their decision to release him and after much protest and contact from the community and mental health advocates from across the nation - accusing them of "patient-dumping" - they decided to transfer him to a Senior Board & Care home, while still prescribing antipsychotics (he is not yet a senior) for 30 days under the guise of a "Safe-Discharge Plan."

Because the Board & Care home was ill-equipped to deal with a person with serious mental illness and his delusional behavior even though Kaiser continued prescribing him antipsychotic medications -- they opened the front door and let a blind, severely and gravely disabled man walk away from the facility in an unfamiliar city. Our family lost contact with him as he fled from his delusions to another city for a month.

Through many attempts to get the County to take appropriate action for him and our family - the County of Solano has continued to fail– at this point clearly negligently and with intent to discriminate.

On February 12, 2020, James Mark Rippee was again struck by a vehicle – this time so critically injured that it will take months for him to recover – if he does. He is in Critical Condition with a Fractured Skull & Brain Bleed, Facial Lacerations & Bruises covering his body, Lung Contusions, a severely Dislocated Shoulder, a Shattered Elbow, Removal of the Metal Rod running the entire length of his leg which had been holding his leg together for 34 years and was bent in the accident, a shattered Tibia, and more. It is expected that many more surgeries will be needed and months in the hospital.

At the time of this writing, the hospital is once again denying that he has diminished capacity and has taken no action to allow family members any rights to know about the details of his condition (HIPAA) and even though my brother is incoherent and sedated – they will not allow family members who love him and know what is best for him to make any medical decisions and are ignoring their duty to declare him with diminished capacity in the face of their previous records on him from 4 months ago.

While we hold the County of Solano and many officials, departments and agencies responsible for not preventing this second tragedy that we told them would happen – We also demand that the State of California and in particular - Governor, Gavin Newsom – whom we have previously attempted to contact – PAY ATTENTION TO THIS SITUATION and ACT accordingly!

Our family has contacted many, many politicians at the County, State, and Federal levels for several years! We have testified at the California State Capitol for several proposed legislation regarding Grave Disability, Conservatorship, and pleaded with all to help our family.

We DEMAND attention from Governor Gavin Newsom, who claims to hold in such regard the need to help the Seriously Mentally Ill and the Homeless! NOW!