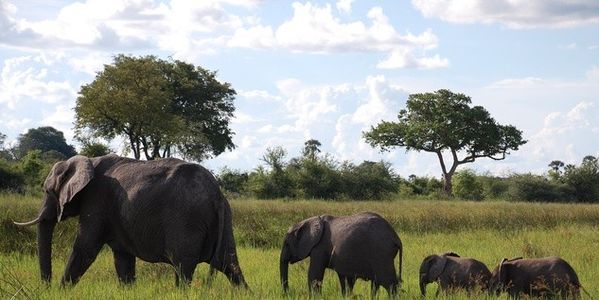 Dallas Zoo is one of three U.S. zoos applying to import 18 elephants from a government park in Swaziland, Africa.

According to a statement by the three zoos, which also include the Henry Doorly Zoo and Aquarium in Omaha and the Sedgwick County Zoo in Wichita, the removal of 18 African elephants is necessary "to prevent further degradation of the landscape" and in order to make room for critically endangered rhinos.

The import applications are for 15 female and three male elephants, which could arrive in the U.S. later this year if the necessary permits are approved. These permit requests are currently under consideration by the U.S. Fish & Wildlife Service and Swaziland wildlife authorities.

If the permits are approved, each zoo will get six elephants.

These elephants were all born in the wild in Swaziland and their exact ages are unknown, but it is confirmed that 15 are sub-adults, estimated to range in age from 6 to 15 years old. Three others are young adult females with estimated age ranges from 20 to 25 years old.

This is not the first time Swaziland has exported elephants to zoos. In 2003, 11 elephants were imported to the San Diego Wild Animal Park and the Lowry Park Zoo in Tampa, Florida. The same rationale, citing congestion and the rhino population, was offered. Their importation was protested by animal welfare and elephant groups, who filed a lawsuit but lost.

One of the main reasons animal advocates protest this kind of activity is the fact that it splits up families, says Deb Robinson, a lawyer who works on animal issues.

"Elephants stay with their families for life, so this will be a situation where you're taking an animal from her mother," Robinson says.

The fact that most of the elephants being taken are young females also indicates that breeding is the primary goal.

"For a while, the Dallas Zoo has been taking in older post-reproductive elephants, but the elephant population in zoos is dying out, and they can't breed them quickly enough," Robinson says. "Zoos are always looking for ways to get young elephants in to breed."

The Dallas Zoo did not respond to a request for comment.

The Sedgwick County Zoo in Wichita recently built a controversial elephant exhibit that cost $10.6 million. A city official described elephants as "one of the top draws at zoos," saying "you can't be a world-class zoo without elephants."

The Henry Doorly Zoo is building a $73 million African Grasslands exhibit, the largest in the zoo's history, not scheduled to be completed until 2017.

According to the release, the 18 elephants are under the care of the nonprofit Big Game Parks Trust in Swaziland and must be exported or culled.

"Relocating the elephants elsewhere in the region is unrealistic due to issues related to excessive poaching, loss of habitat, and elephant-human conflicts," says the release. "Drought conditions and degraded park land require Swaziland to truck in hay from South Africa to feed the 18 elephants daily."

If the 18 elephants are allowed to be deported, another 15 elephants will remain in Swaziland as "symbols" of Swaziland's "rich heritage."

According to the release, the previous elephants imported from Swaziland have been a success, as measured by breeding rate: "Today the elephants are thriving. Each female has successfully delivered at least one calf, and all but one bull has sired, resulting in 14 births."