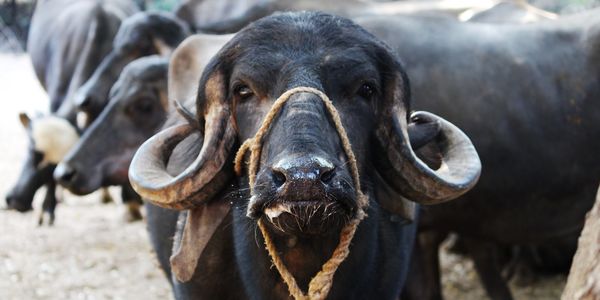 A Farmer Abandoned 1,000 Buffalo. Close To Half Are Already Dead.

"I arrived here; it was a war scene."

Those were the words of the veterinarian in charge of emergency care for a herd of over 1,000 buffalo that had been abandoned by a dairy farmer on his property in Brazil. The rescue efforts are ongoing, but so far approximately 500 of these poor animals have died from starvation.

Sign the petition demanding that the civil police bring charges against the farm's owner for this heinous case of cruelty!

When environmental police first responded to reports of "malnourished and mistreated animals," they counted 667 living, suffering animals trapped in a confined area -- along with countless carcasses. That's when the volunteers showed up, and what they saw was horrible.

Buffalo with sunken-in features and bones sticking out were too weak to stand. Some had to be lifted up from the ground using heavy machinery in order to be examined and cared for. Others fell and never stood back up. Close to 500 had died where their starving counterparts stood, the surviving living among the dead. It is too soon to say how many more buffalo will die from their condition, too far gone to save.

When a TV reporter asked the owner about the conditions at his farm, he actually claimed he did nothing wrong. Stating that there was plenty of food and water for the buffalo he abandoned, he suggested that some must have died from natural causes.

There is nothing natural about the way these skin-and-bones buffalo died. No excuse in the world could justify the suffering that he inflicted on his animals, who depended on him and who must have earned him a good sum of money in the dairy business.

He has already been fined with environmental infractions, but civil police have not yet brought charges against this farm owner. We must demand that authorities conduct a thorough investigation and charge him to the fullest extent with animal cruelty! Sign the petition if you agree!

Care2
A Farmer Abandoned 1,000 Buffalo. Close To Half Are Already Dead.
SHARETWEET