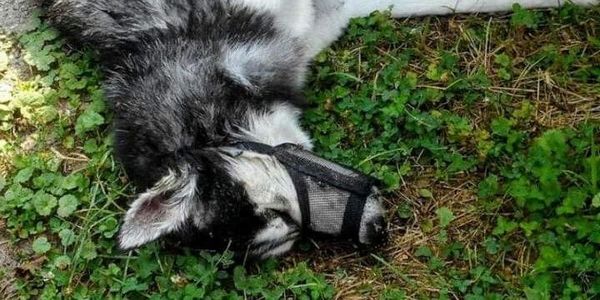 THE DEATH OF BLUE:
In the early morning of 7/20, Mr. C and his son had just finished mowing Grandma's lawn on Weber Rd. in Columbus, OH and were headed home. As they drove by an alley, they saw what they thought was a large stuffed animal. They stopped the truck to investigate and to their horror, they found an unmoving, tightly muzzled dog. Mr. C quickly determined that the dog (whose name was later identified as "Blue") was dead and he called Mrs. C. She called the Columbus Humane Society and asked them to pick up the dog's body.

Mr. C took his son home and he and Mrs. C returned to the alley to see if Blue's body had been retrieved. The body was gone but as they started to leave, a woman across the alley came out and asked, "Are you looking for the dog?" Mrs. C replied, "I called the Humane Society and they were supposed to come out." The woman stated, "I called the Humane Society, too, and they told me to bag up the dog and throw it in the trash. My daughter and her friend came over to help me. I saw somebody dumping something in this alley last night but it was dark so I didn't find the dog until this morning."

When they arrived home, Mrs. C was furious and called HS's Cruelty Division. When she asked why they would tell someone to throw a dead dog in the trash, they replied that this is their standard response. Mrs. C investigated and discovered that dead animals are not to be discarded in this fashion and reported HS to the Division of Refuse Collection.

Determined to discover what had happened to Blue, Mrs. C posted pics of him to a neighborhood site and quickly received a response. Someone that worked with the dog's owners (who we will refer to as #1) recognized Blue and provided Mrs. C with their phone numbers. Mrs. C contacted #1 who told her the following:

Blue was a 3 years old purebred husky and was purchased for $4k from a breeder. #1 decided that they didn't have time for Blue and complained that he was "nippy". They found someone interested in taking him and some time between 7/14-7/16, they gave the dog to this, as yet, unidentified person (who we will refer to as #2). #1 called #2 on Saturday, 7/20, to check on Blue and F stated that "Blue ran away, came back, was fine and then jumped through a glass window". #2 demanded that #1 pay for the broken window at which point #1 asked to have the dog back. #2 said that they wanted "more time" with Blue, all the while knowing that Blue was laying dead in an alley, dumped the previous night. Mrs. C asked #1 to provide her with the name and phone of #2 but #1 refused, fearing retaliation.

Mrs. C called HS again and this time advised that she had the phone #s of the previous owners. They put her through to the chief who agreed to meet her at 5pm on Monday, 7/22. After arriving, the chief started pulling trash that had been piled on top of Blue's bagged body out of the small dumpster. When they saw the bag at the bottom, it was swarming with flies and maggots and the extreme temperatures had accelerated decomposition. Although she offered to help, the chief insisted that Mrs. C return to the vehicle so that she would not have to witness him putting the body into a sealed crate.

First, Mr. and Mrs. C deserve massive respect and gratitude from everyone within the animal advocacy community. Each step of their journey to help Blue was more horrific then the next but they never wavered. As dog owners themselves, this experience has broken them. The profound impact of seeing this level of evil at close range cannot be understated. Our hearts go out to them.

Now, it is time for JUSTICE. We will demand that the Columbus Humane Society will live up to the letter of the law as set forth in ORC 1717.06. We will be updating as soon as information becomes available and we know that if we put out a call for action, all of you will help.
Sign Petition
SHAREShare this petition with friends!TWEETEMAILEMBED
Sign Petition
See more petitions:
You have JavaScript disabled. Without it, our site might not function properly.