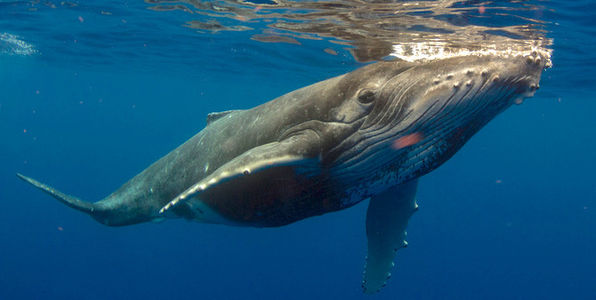 If we don't force ships to slow down, the last 50 of these endangered whales will die!

Earlier this year, researchers with the U.S. National Oceanic and Atmospheric Administration (NOAA) announced an exciting discovery: a previously unrecognized, unique whale species living in the Gulf of Mexico. Its new name? The straight-forward label "Gulf of Mexico whales."

But only 50 of these creatures remain alive. And those last 50 are at risk of being killed by ships and boats cruising through the Gulf waters.

These animals are the only known species of whales that swim exclusively in U.S. coastal waters. But they're also one of the most highly endangered whale species on the entire planet.

There are many reasons for whales' population declines in recent decades, including starvation from climate change, pollution, chronic health issues from loud ship noises, and also violent impacts with ships that race through the waters, whose captains are uncaring about whether or not they strike these precious animals — leaving the whales to die from painful injuries.

Nighttime is particularly dangerous, because this is the time of day when whales are mostly likely to be close to the surface of the waters, often resting here close enough to rise up for oxygen.

Luckily, a conservation non-profit organization, the National Resources Defense Council (NRDC), has filed a petition with the federal government urging NOAA to implement stricter regulations for ships operating off the U.S. coast. Specifically, the NRDC and other animal welfare groups are urging NOAA to create a year-round speed limit in the Gulf of Mexico to slow vessels down and save whales' lives.

The only reason not to slow down is for greedy profit-mongering reasons. And we can't let that imperil the last 50 Gulf of Mexico whales alive.

Tell the U.S. National Oceanic and Atmospheric Administration to require all vessels in the Gulf of Mexico to reduce their traveling speeds and protect the lives of all whales!
Sign Petition
SHAREShare this petition with friends!TWEETEMAILEMBED
Sign Petition
See more petitions:
You have JavaScript disabled. Without it, our site might not function properly.

Care2
If we don't force ships to slow down, the last 50 of these endangered whales will die!
SHARETWEET