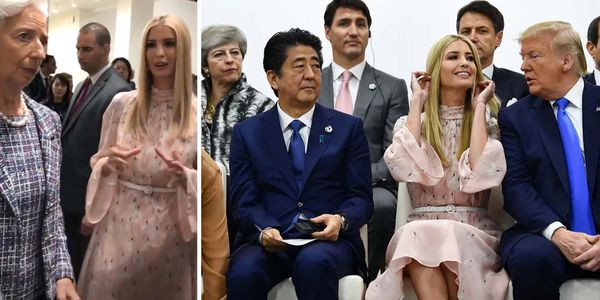 The whole world had a good laugh when first daughter Ivanka Trump was caught on tape at the G-20 trying to enter a conversation with world leaders, only to receive cold shoulders and eye rolls at her insipid remarks.

But this is no laughing matter.

The first daughter has been allowed to engage in diplomacy at the highest levels — levels usually reserved for Secretaries of State, career foreign service professionals, and presidents.

Yet, Ivanka has not been elected or confirmed by the Senate. Moreover, she holds no real world qualifications besides her status as offspring of the president, who himself is the first in U.S. history to hold no prior public service record.

In short, in the most important dialogues on the planet, our nation is being represented by an amateur.

When Ivanka speaks at official events, on the public dime, she speaks for the United States of America. The discussions she participates in have far-reaching consequences for our nation and the world. This is an embarrassment with the potentially grave repercussions, and it must stop.

When the United States declared independence, it did so in part to throw off the shackles of inherited power, of nepotism at the highest levels. It is time we did so again.

Add your name to demand Trump's children stop representing the U.S. on the world stage. We deserve to be represented by people who have respect, experience, and some inkling of what the job entails.