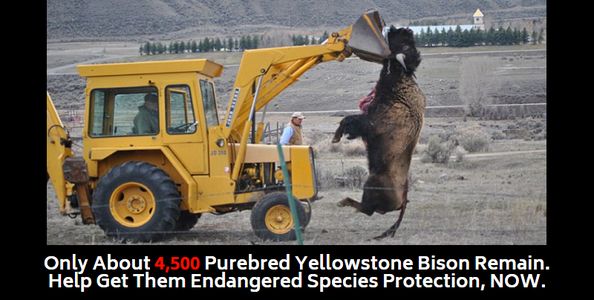 The U.S. Fish and Wildlife Service is refusing to give endangered species protections to Yellowstone's purebred bison! Add your name if you want to demand they get the status they deserve, NOW!

What was their excuse?

"The petition for the Yellowstone bison did not present substantial information to indicate listing may be warranted, so no additional action will be taken."

First of all, one of the park's two major herds is in "steep decline," according to Darrell Geist, a habitat coordinator for the nonprofit Buffalo Field Campaign.

But the most important thing to understand is that the Yellowstone bison are some of the few left alive in the world to have the diversity of genetics vital to keeping the species healthy.

The problem is: most modern bison are inbred.

In July of 2019, two bison males from Yellowstone were brought to the Oakland Zoo to contribute their genetics for the good of the species.

"The aim of this multi-pronged effort for genetic diversity is to ensure the health and longevity of future American bison generations; the species reached near-extinction in the early 1900s when millions were killed during the westward expansion for grasslands needed to feed livestock. Though their numbers have increased tremendously, herds in the wild and herds in private and public reserves, are quite inbred," reported Yahoo News.

But the Yellowstone bison are still purebred, and carry the strong genetics of their ancestors from the days before the species was almost hunted to extinction.

Meanwhile, cattle farmers are afraid that the Yellowstone bison will introduce brucellosis, a contagious disease that can cause pregnant cows and other animals to miscarry their young, to their herds.

"There has been concern about the presence of brucellosis in the Yellowstone National Park (YNP) bison herd since the inception of the Cooperative State-Federal Brucellosis Eradication Program in 1934," said the USDA.

As a result, Yellowstone culls hundreds of bison every year.

"The Yellowstone bison population is estimated to be around 4,500, and the Interagency Bison Management Plan (IBMP) partners agreed on a plan to cull the population by between 600 and 900 bison" in 2019, according to Yellowstone Insider.

Isn't it a crime to cull hundreds of these precious animals every year, for the sake of the cattle industry?

Then add your name to ask Aurelia Skipwith, Director of the U.S. Fish and Wildlife Service, to do the right thing and give Yellowstone's bison the protected status they deserve!