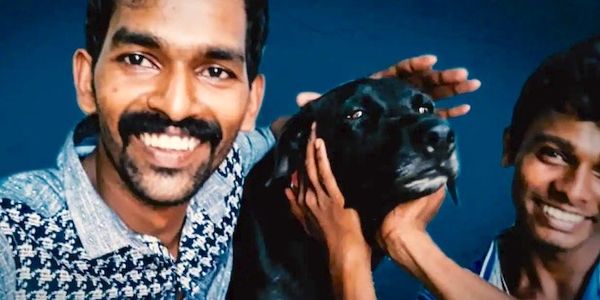 They beat his dog to death with a bat, then threatened to kill his entire family

Just recently, a man in Kerala, India went looking for his beloved pet dog Bruno — only to discover he had been brutally beaten, murdered, and disposed of that morning.

Bruno had been a family pet for eight years, since he was a puppy. Those who knew him said he was sweet, friendly, and loyal. But when two men and a youth in the community found Bruno sleeping near their small fishing boat, they decided it was time to torture this innocent animal.

The two adults have been identified as Sylvester and Sunil, and local police say they held resentments towards Bruno's human father, Christhurajan. Rather than taking the responsible route of simply talking it out, they jumped when they saw a chance to break Bruno's body — and his family's hearts.

**Only read on if you're prepared to learn what they did to this poor pup.**

To begin, Sunil, Sylvester, and the boy with them grabbed a fishing hook from the boat and tied up Bruno until he couldn't move, stand, or fight back. Then they found several bats and beat Bruno over and over and over again until he finally died from the violent injuries.

When they were done with that, they simply threw his dead, beaten body out into the sea.

The entire incident was caught on video, and police in the area are now involved. All three suspects have been arrested, but it's not clear whether they will truly be held accountable. Even worse: if justice is not served, things might only get worse for Bruno's people. Apparently, after the video of their bloody assault went viral online, the accused perpetrators warned Christhurajan that if he sought justice from the authorities, they would come after the rest of his family — and kill them all.

Clearly the adult men involved in this heinous, shocking crime cannot be trusted with respecting life — either the lives of animals, or the lives of humans. Officials in Kerala must take this murder and threats of additional murders seriously. Sign the petition to show the world is watching!
Sign Petition
SHAREShare With FriendsTWEETEMAILEMBED
Sign Petition
See more petitions:
You have JavaScript disabled. Without it, our site might not function properly.

Care2
They beat his dog to death with a bat, then threatened to kill his entire family
SHARETWEET