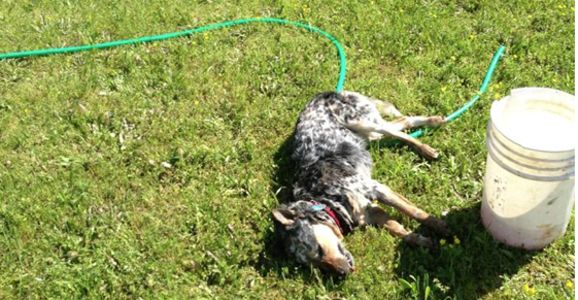 Demand Justice For Candy and the Middleton Family!

Candy was an innocent dog who was shot in the back of the head by office Jerred Dooley ID #510.  Mr. Middleton, Candy's owner, had called the Sherrif's office to report that his home had been robbed and was waiting for the officer to arrive.  While waiting, he went out into his fields to continue his farm work.  Candy, his 3 year old Austrailian Cattle Dog was sitting in the back of his pick up truck.  2 1/2 hours later, Deputy Dooley arrived and was met by Candy barking at the stranger in her driveway.  Rather than wait in his car for Mr. Middleton to come to him.  He exited his car, pointed his gun at Candy and fired, shooting her in the back of the head.  Mr. Middleton saw some activity and began heading back toward Deputy Dooley. When he got close enough, Dooley muttered, "I' shot your dog, sorry."  When he saw how upset Mr. Middleton was, he retreated to his squad car and got on the loudspeaker exclaiming "Do not approach the vehicle." and called in reinforcements.  In the meantime, Candy lay there thrashing around dying.  Mr. Middleton begged Dooley to shoot her again to end her pain, but he would not.  Mr. Middleton could not, since his firearms had been stollen earlier in the day.  Mr. Middleton, in order to end her pain, had to DROWN CANDY IN A FIVE GALLON BUCKET OF WATER!

Office Dooley was on private property, Candy was a medium sized dog of about 40 pounds, with no history of aggression or biting anyone.  She was simply barking because someone was in her space, like any dog would do.  Office Dooley not only used excessive, unreasonable force here, he used horrible judgement in getting out of his vehicle.  He then continued to mock Mr. Middleton in his time of total despair and loss.  It is all on video.  To see more, please visit Justice for Candy Middleton Facebook page.

Police all over the country are using excessive force with animals.  There is video of officers shooting a dog who is just standing there wagging it's tail, reports of police shooting a dog sitting on it's own front porch and even reports of officers going into someone's yard and shooting dogs on their own property.  This needs to end, a precident needs to be set. Our family pets are not fair game for target practice.  Officers need to be held accountible for the way the choose to handle these situations. Officer Dooley had choices in this situation, he opted to use excessive force, when it was not at all neccessary, Let's make sure that Office Dooley is held accountable for this choice.  We ask that he be removed from the Rains County Sherrif's Department.  No one with such a casual attitude about taking the life of an animal should be allowed to be an officer of the law.

Office of the Governor

We demand that Jerred Dooley be charged and prosecuted to the fullest extent, with animal neglect and cruelty, based on the occurences of April 18, 2014 at the Middleton farm.  Jerred Dooley exhibited no remorse or willingness to put the animal that he mortally wounded out of her misery and showed only concern for himself. These are the typical traits of a sociopath animal abuser, many of which go on to cause harm or death to other human beings.  Nothing can bring back the life of Candy, the Middleton family dog, but it will give them the comfort that this type of behavior will not be tolerated.  We also ask that discipinary action be taken agains State Trooper Hayes, who is seen in the video mocking the Middleton family.

Care2
Demand Justice For Candy and the Middleton Family!
SHARETWEET