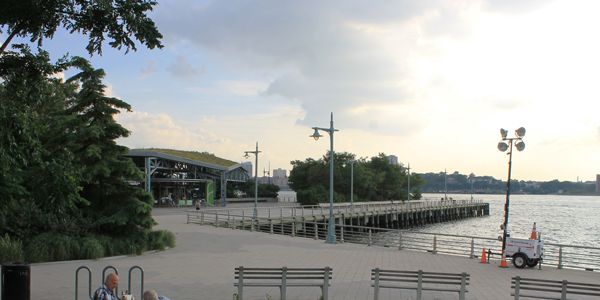 SAY NO to the Beer Garden at Pier 62

It is urgent that you sign this petition to keep Pier 62 in Hudson River Park free from a commercial enterprise that will obliterate the quiet beauty of this special spot deep in the Hudson River Park.

Please join The Chelsea Waterside Park Association, Save Chelsea, and The Council of Chelsea Block Associations in opposing Hudson River Park Trust’s plan to put a 200-seat commercial establishment on Pier 62. By signing this petition, you’ll be adding your voice to overwhelming opposition by the community and State Assemblyman Richard Gottfried, State Senator Brad Hoylman, City Councilman Corey Johnson and Borough President Gale Brewer. We all share serious concerns about the trust's plans to privatize this unique and beloved pier.

Additional reasons to oppose are:

• Pier 62 is located in the Hudson River Park between 22nd and 23rd Streets West of 11th Avenue and just to the North of the Chelsea Piers Complex. With views up and down the Hudson River, this tranquil section of the pier is completely irreplaceable.

•The “beer garden,” to be operated by Merchant’s Hospitality, would be located just next to a Skate Park and Carousel already on the pier. This 200 seat establishment would eradicate existing dedicated public space, and block access to magnificent views currently available to everyone. Pier 62 is a one of kind open space within the Hudson River Park.

•The so-called “beer garden” will be a private enterprise serving food and hard liquor, as well as beer. Two CB4 Committees have highlighted the difficult logistics of operating in this location: the long distance through parkland from street entrance for deliveries and waste removal (garbage and human), lack of adequate water for cleaning and cooking, as well as the need to install smelly and unattractive porta-sans in lieu of standard restroom facilities. This establishment will also set a major precedent for future park use.

• Although the beer garden was first proposed by the HRPT in 2013, the Trust has not been transparent with the community, or provided adequate opportunities for public input.

• With the two committee votes to reject the application, consideration of the beer garden will now go to the full board when CB4 meets on December 2 (see below for details).

Assemblyman Richard Gottfried's statement urging BLP to oppose Merchants’ application read, “This is not an appropriate location for a commercial establishment of this kind and size."

In a statement made November 13th, Senator Brad Hoylman said, “I’m extremely grateful CB4’s Waterfront and Permit Committees voted to reject this private applicant proposing a beer garden in the middle of a public green space. Our parks are a precious resource that shouldn’t be leased to the highest bidder, especially in the case of Pier 62, which is one of the last truly peaceful oases in Hudson River Park. I look forward to working with the community to fight to protect the integrity of our open space.”

DNAinfo reports that, “Councilman Corey Johnson seconded Hoylman's concerns and said he's been pushing for more green space in his district, not less.”

Please make every effort to attend this important meeting, whether you intend to testify or not. If possible, let us know you will be attending. Once again, it is urgent that the neighborhood fights to keep Pier 62 in Hudson River Park free from a commercial enterprise that will obliterate the quiet beauty of this special spot deep in the park. Pier 62 belongs to everyone, don't let it be privatized!

Care2
SAY NO to the Beer Garden at Pier 62
SHARETWEET