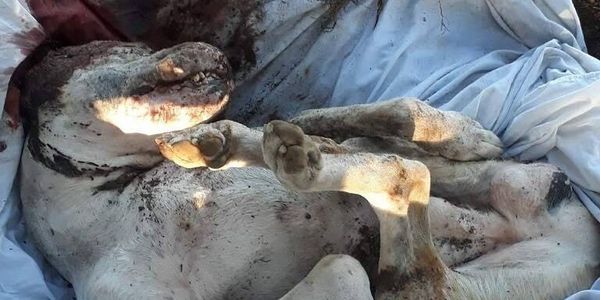 Give Justice to the family of Mud the dog who was shot by NZ Police during a house raid.

Via "American Pit Bull Terrier Assn Inc (NZ)" Facebook Page:
Having spoken with Todd at length here is what he had to say about the AOS raid, Mud's murder and the effect on his family. Since police won't return his calls and will only make the standard generic statements to the media, their position and comments on the specifics surrounding the events of Friday, 9 November 2018 are unavailable.

That day, Todd had been playing with Mud, a purebred American Bulldog, in his backyard. Wanting to do some more work on his dirt bike, Todd shut Mud away in his sleep out. He then saw members of the AOS at the end of his driveway pointing their weapons at him. He was marched off the property by them.

His partner Alix, realising what was happening, managed to shut their other two dogs in the toilet before she too was removed by the AOS. Before they man-handled her off the property, she managed to make it to the sleep out to try to calm Mud and told him that it's OK, everything's going to be OK.

Todd pointed out to police that the address on the warrant was ambiguous, stating only the street number and failing to differentiate between property and A and property B, his being A. That apparently made no never mind to police and both properties were subsequently raided. Todd had this to say via Messenger:

"over my fence is number (XXXX) and I'm a and the front house is b the letter is on my front gate post and the b is above the door at the front house witch I pointed out to the cop at the end just before they told us about mud at the time we were marched out they didn't show us the search warrant nor while we was being detained I asked them as they marched me out witch property they were after the said over the fence not mine so that made me even more confused y they were going threw my place and then at the end wouldn't give us a copy of the warrant as it wasn't my place they were after but yet it all happened on my property I pay rent for"
Both Todd and Alix were co-operative and tried to reason with police about their 3 dogs, explaining their anxiety about the dog's reaction to such a situation and asking if they could remove their dogs from the property also.

This was refused and they were forced to leave the dogs behind.

Both Todd and Alix advised police that Mud was in the sleep out, besides which, no matter what side of the house the sleep out can be approached from Mud could be seen, if not heard with his deep, gravelly bark.

Todd and Alix were removed to about 1km away from their home and held for some 3 hours or more while the AOS and police turned their home over.

Todd estimates that there were approximately 15 to 20 AOS members and police present, a manically shrieking and barking police dog, and around 20 police cars lining both sides of the road. The main road had been closed off for the operation.

Police kicked the gates in. At that point they would have seen Mud behind the glass doors.

It wasn't until the last of the police left that Todd and Alix were allowed to go home and that was when they were told that Mud had been shot by police and was dead.

Todd found Mud lying on the back lawn. He will never get the image of the damage to his much loved four-legged family member out of his head. He said it's what he sees every time he closes his eyes. Blood spatter was everywhere, shell cases remained where they fell, Mud lay with his head in a large pool of his own blood.

For Todd and Alix Douglas life will never be the same again. Home is no longer a safe place. Their 2 surviving dogs are also affected and are now nervous and clingy. Worse, Todd's 13 year old son has had to take in the fact that the police have killed Mud, a wrongful killing that should not have happened.

Todd and Alix have both been left traumatised, shocked, depressed and grieving. Sleep eludes them and crying is something they just can't stop.

Why were Todd and Alix Douglas not allowed to simply secure and remove their dogs from the property?

Why did police let an obviously agitated Mud loose among their members and dog?

If they wanted to search the sleep out why didn't they call upon animal control to secure Mud with a catch pole for the sake of everyone's safety and Mud's?

Why have the police failed to return Todd's calls to explain their actions that day?

Where is their apology?

What redress is available when police raid the wrong address and kill a family pet?

Finally, who informed the media that Mud was a Pit Bull when plainly he is not?

Just a few of many questions the police have yet to answer.

RIP Mud.
Sign Petition
SHAREShare this petition with friends!TWEETEMAILEMBED
Sign Petition
See more petitions:
You have JavaScript disabled. Without it, our site might not function properly.

Care2
Give Justice to the family of Mud the dog who was shot by NZ Police during a house raid.
SHARETWEET