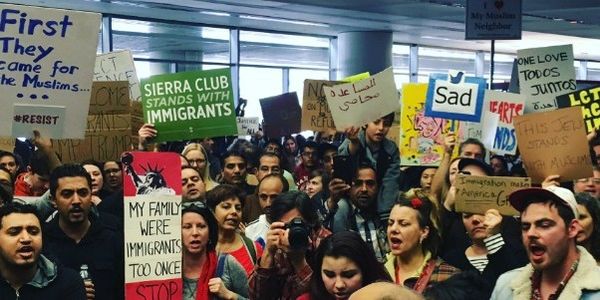 Without any real consultation from intelligence and security experts, President Trump hastily created a xenophobic ban on travel from seven Muslim-majority countries.

You may have read about it in the news, as protesters flocked to international airports to welcome refugees and show their opposition to the ban. You may have seen photos on Facebook, or heard the stories about lawyers and members of Congress rushing to offer their help.

Even though Donald Trump has tried to claim that this ban is necessary to our national security, the intelligence community and even many Republican lawmakers agree that this ban actually threatens our security. The ban has caused international chaos, stranding American green card holders all over the world and ripping families apart. ISIS has even claimed the ban is a victory in their anti-US propaganda machine.

Trump's ban on travel from Muslim-majority countries will only serve to intensify the growing and unjustified Islamophobia in this country. So as a Care2 community, we must stand up and say a resounding "No!" to the ban.

Here are two actions you can take to force Trump to reverse his Islamophobic travel ban:

Care2 members all over the globe are urging Congress to vote against the ban. Will you join them?

Call Your Representatives And Senators

Now that a new bill to end this ban has been introduced, it's time to put the pressure on the politicians who represent us. Find out who your representative is and call them today asking them to support this repeal. You can even just read them parts of this petition, as a long as your rep know what you want!

In solidarity every step of the way,