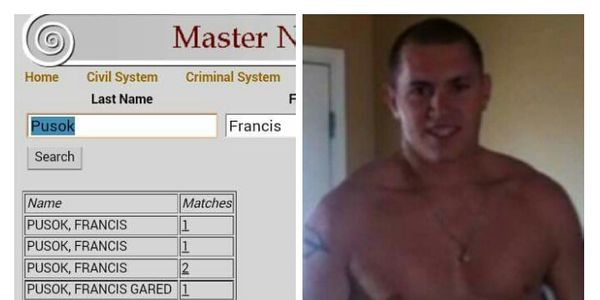 Francis Jared Pusok on 04/06/15 after 3am paced up and down our fence line like an animal until we had  turned off our lights In our house, cut through my fence, cut the lock off my gate, crawled through my chain link fence, paced the Iside of my property, jumped my block wall surrounding my home, came In to my garage through my back door, came In to my home while we slept, stole my keys to my street bike (gsxr 1000), went back Into my garage, opened my electric garage door and stole my street bike. With no regard to his safety, his families or the safety of anyone else. The police arrived to my home within minutes and put out an all points bulletin. On 04/09/15 at about 10am I was told that Francis Jared Pusok was the person who was In my home, did property damage to my home, trespasses, stole my street bike, stole the key and other property belonging to me as well as put my family at risk and terrorized their safety. I picked up my bike from Francis Jared Pusok's house In Apple Valley on Del Oro Rd.

I live in Lucerne Valley with my family, we have lived here since 2000. Our children were born here in Victorville and graduated from the same high school my wife and I graduated from.

Officers located my street bike at Francis Jared Pusok and his familie's home In their locked back yard. My motorcycle cable and lock were on another stolen bike In their back yard. The key to my motor cycle In his and his girldfriend's bedroom. His finger and hand prints all over my bike. The officers loaded two roll back tow trucks worth of stolen property from the back yard of Pusok and his girlfriend.

My motorcycle Is damaged. My family doesn't feel safe In their own home. My wife can't sleep In fear Pusok, his family or friends will be back to continue to violate our family.

Who dropped Francis Jared Pusok off at my home to rob it? Why did he travel to Lucerne Valley from Apple Valley to steal my property and terrorize my family? Why would he commit a home invasion, especially while we are home? Why would he put his life at risk over my street bike? Possibly leave his children without a father. What if I would of shot and killed him in my home or garage? What if my wife, children or grandchildren encountered him, would he of harmed or killed them? If our dogs surprised Pusok in our yard, was he willing to hurt or kill them to get away? He had to of ran these scenarios before entering our property. How did he know of my street bike? Did he stalk me and/or my wife? Did he follow us home? Why isn't his girlfriend being arrested for storing stolen property in their yard and house? She knows of his past behavior and current behaviors, as a girlfriend would. Why did they put their children in danger as they have and then try to blame others for harm to their family? How can Pusok and his girlfriend claim to be afraid of anyone to include law enforcement when they act fearless and without regard of their safety? Stealing then storing stolen property at their home puts their children at grave risk. If a victim aggressively arrived at their home to retrieve their property. Armed officials serving search warrant. Why did they go out of their way to target my family? We don't know these people. We do not have any mutual friends.

We learned from other people in the community of Apple Valley that Francis Jared Pusok has been killing their dogs and then robbing their homes. That they too fear for the safety of their families.

It was then brought to our attention that Francis Jared Pusok had shot his children's puppy while he was on probation and prohibited from use or possession of a firearm and/or ammunition.

Francis Jared Pusok is a career criminal and convicted felon on parole/probation, still breaking the laws and violating his probation/parole.

Felon Arrested for Shooting a Dog

On 03/10/2015 Pusok Fails to Appear for Court Arraignment and is Considered A Fugitive!

04/06/2015 Pusok Trespasses on my property, commits home invasion,  grand theft auto,  property damage and steals other items from me.

04/09/2015 Pusok is at a home on Zuni where a warrant is being served for Identity Theft and he flees from police as he is a Fugitive for FTA. He then crashed a fence, led officers on a high speed pursuit and then stole a man's horse in further attempts to avoid being arrested.

At this point Pusok is again in violation of another probationary violation.

(Although officers while apprehending Pusok caused him harm, Pusok can in no way hold them responsible for his own actions. He has just as much if not more person accountability for what he has done)

Someone committing a crime against you should not mitigate your illegal activities. Just because you are wronged in the commission of a crime you are committing does not mean you deserve to be rewarded for it. This sends out the WRONG MESSAGE... Go out and provoke Law Enforcement so You Too can have a PAY DAY!!

Now his mother is harassing me with threats against my family and myself if I don't remove my posts about her son and refuse to testify against him. I have asked them not to contact me or my family. Yet they continue to do so.

I can clearly see how Pusok believes he can do whatever he wants, he has and has been aloud to do so with little to no consequences. Even his own mother believes they are above everyone else. Contacting me with threats and preaching scriptures from the Bible.

Francis Jared Pusok should have a restitution account set up for his past, present and future victims. If you are a victim contact victim services in Victorville, California.

We need to stand up for OUR rights.... to the pursuit of happiness, safety for our family/self/animals/property and community.

Being mindful that the day after he was awarded $650k he was given a verbal warning for trespassing on several private properties.

Prop 47 should not apply to people like Francis Jared Pusok.

We need to speak up and refuse to allow criminals to have more rights than the productive members in our community have. We earn what we have, they should too.