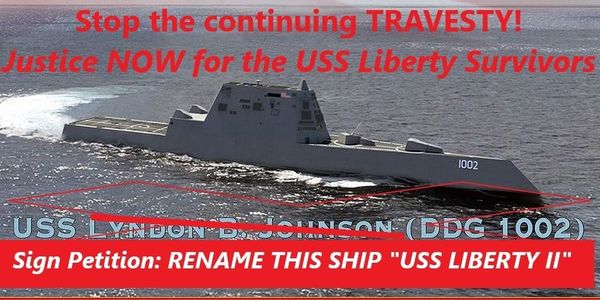 PETITION FOR APPEAL OF U.S. NAVY DECISION To Name a Navy Ship After President Lyndon B. Johnson

For the following specific reasons, the signatory petitioners hereby request that the referenced ship be renamed. Our suggestion for a new name, and the reasons it is more appropriate, will become self-evident below:

WHEREAS, The naming of all U.S. Navy vessels or bases must, obviously and intrinsically, be named for honorable and just causes, or people of great service and honorable distinction, or be symbolic of great and noble causes; and
WHEREAS, The naming of vessels or bases for people whose conduct may currently be challenged as less than honorable, potentially becoming highly controversial, would therefore pose great risks of future shame and ridicule directed to the U.S. Navy; and
WHEREAS, The thirty-sixth President of the United States of America, Lyndon B. Johnson, stands accused by many thousands of American citizens of criminal conduct, variously against others and specifically against the crewmembers of the USS Liberty on June 8, 1967, in allowing the attack by Israel's IDF military forces; in preventing American fighter jets to come to its defense, twice, during that attack; possibly even ordering his own submarine, the USS Amberjack to fire a torpedo at the Liberty to ensure that it would sink; then to fail to send aid to the listing ship for over seventeen (17) hours until the following morning; and
WHEREAS, In his personal investigation of the attack on the Liberty, the honorable Admiral Thomas H. Moorer, a former chairman of the Joint Chiefs of Staff, stated:
"I am compelled to speak out about one of US history's most shocking cover-ups. On June 8, 1967, Israel attacked our proud naval ship – the USS Liberty – killing 34 American servicemen and wounding 172. Those men were then betrayed and left to die by our own government. US military rescue aircraft were recalled – not once, but twice – through direct intervention by the Johnson administration [implicitly and categorically, directed to Lyndon B. Johnson himself]. This attack was the most disgraceful act I witnessed in my entire military career." (See the January 16, 2004 edition of The Stars And Stripes for his complete statement).
WHEREAS, The thoroughly indexed, meticulously detailed book Remember the Liberty! (copy attached for your review) having stipulated these and other charges, provides sufficient justification as the basis for the requests we present to you;

WHEREAS,  Historically, the USS Liberty, AGTR-5, is the most decorated Navy ship for a single engagement including:  Medal of Honor, 2 Navy Crosses, 12 Silver Stars, 26 Bronze Stars, 208 Purple Hearts, the Presidential Unit Citation, and more;

AND WHEREAS, The organization which represents the interests and objectives of all survivors of the infamous attack on the USS Liberty, the USS Liberty Veterans Association, has approved this petition and the recommendations stated below;
_____________________________________________________
NOW, THEREFORE, we, as a patriotic group of American citizens concerned with the preservation of the public trust and confidence in the highest traditions of the U.S. Navy, do hereby appeal to you to affect an immediate order to cancel the current plans to name the above vessel as stipulated above.

AND, TO ORDER THAT THIS VESSEL BE RENAMED as one of the following alternate names:
• The USS Liberty II (For the obvious reason that it would proudly continue a worthy and honorable name that now stands defiled, fifty years after the original vessel was scrapped due to the destruction caused it in the Israeli attack noted); or,

• A name picked from the following list of senior US Navy officers who fought vigorously for an honest investigation of this "disgraceful act":

o Admiral Thomas H. Moorer (for reasons as noted above and as further described within the book Remember the Liberty!); or,

o Admiral Lawrence Geis (the Captain of the USS America, who came to the aid of the Liberty after having tried to intervene during the attack to send fighter jets to defend the ship, also detailed within the book Remember the Liberty!);or,

o Captain Ward Boston, Jr. JAGC, USN (Who came forth in 2004 to document the real events relating to the cover-up of the attack put into effect by Johnson, whose statements have been referenced within the book Remember the Liberty!); or,

o Rear Admiral Merlin Staring (Who was a Captain JAGC in 1967, but eventually came forward in 2004 to categorically state that the official findings of the 1967 Navy Court of Inquiry lacked credibility: specifically, that there was no evidence or testimony to support the finding that the attack on the Liberty was a case of "mistaken identity". His statements are also documented within the book Remember the Liberty!).

Care2
PETITION FOR APPEAL OF U.S. NAVY DECISION To Name a Navy Ship After President Lyndon B. Johnson
SHARETWEET