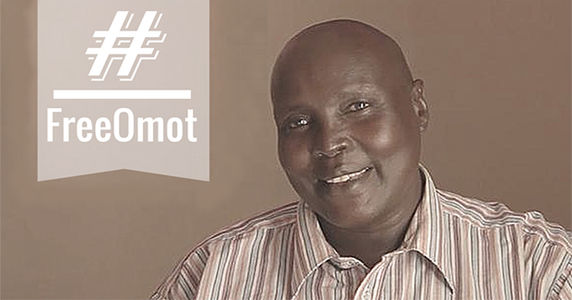 Helping to give indigenous and marginalized people a voice about their most precious resources—their land and their food—is NOT terrorism; it is the foundation of a democratic and sustainable development policy. We strongly denounce the arrest of Ethiopian food and land activists and demand their release!

In March of 2015, Omot Agwa Okwoy, Ashinie Astin, Jamal Oumar Hojele were arrested on their way to a workshop on food security. The three food, land, and indigenous rights activists were detained for nearly six months without charge and denied access to legal representation. On September 7, 2015, they were charged under Ethiopia’s draconian counterterrorism law.

With this petition, we denounce the Ethiopian government as well as its financial backers—the US, the UK, Germany, Switzerland, Canada, and the World Bank, which provide financing to Ethiopia through international aid packages—for the unjust imprisonment of these activists and call for the government of Ethiopia to drop of all charges against them.

Omot Agwa Okwoy was an interpreter for the World Bank during its 2014 investigation of a complaint by Anuak indigenous people alleging widespread forced displacement and human rights violations related to a World Bank project in the southwestern Gambela region. Omot arranged interviews for the bank’s Inspection Panel with Anuak who told World Bank investigators about beatings, rapes, and summary executions by Ethiopian soldiers. Soon after, government agents began hunting for Omot, visiting his church, his family, and leaving messages on his phone leading up to his arrest in March.

Instead of supporting Omot, his former employer the World Bank has said little about his case and continues to bankroll the Ethiopian government, as do the governments of the US, UK, Germany, Switzerland, and Canada.

The charges against Omot and the other activists claim that they are active in the Gambela Peoples Liberation Movement (GPLM) though it is not considered by the Ethiopian government or any other body to be a terrorist organization. The activists have no ties to the GPLM and there is no evidence linking them to the organization. Nor is there any evidence to suggest that the food security workshop in Nairobi had any connection to the GPLM. These charges were fabricated by the Ethiopian police and prosecutors, under Ethiopia’s highly controversial counterterrorism law, in order to intimidate and silence the country’s indigenous communities. The Anuak and other indigenous peoples in Ethiopia are struggling to defend their lands and resources against the incursion of large-scale land grabbing by foreign and domestic investors.

The families of Omot, Ashinie, and Jamal are struggling to get by and provide food for their children after the senseless loss of their primary income-earners. Omot’s wife Abang, for instance, is currently living in exile, in a refugee camp in South Sudan with their two young girls under difficult conditions and without access to proper schooling. The next hearing in the case of the three activists is scheduled for November 5, 2015.

Tell Ethiopia, the US, the UK, Germany, Switzerland, Canada, and the World Bank that you stand with land rights and human rights defenders!

This petition is supported by: Anywaa Survival Organisation, Oakland Institute, GRAIN, Bread for All, and Inclusive Development International.

For more information on this case, see: www.anywaasurvival.org

To support the detainees and their families, contribute to our Indiegogo campaign.

I denounce the Ethiopian government and its financial backers—the US, the UK, Germany, Switzerland, Canada, and the World Bank, which provide financing to Ethiopia through international aid packages—for the unjust imprisonment of Omot Agwa Okwoy, Ashinie Astin, and Jamal Oumar Hojele. Helping to give indigenous and marginalized people a voice about their most precious resources—their land and their food—is NOT terrorism; it is the foundation of a democratic and sustainable development policy. I call on the government of Ethiopia to drop of all charges against the detainees and release them immediately.