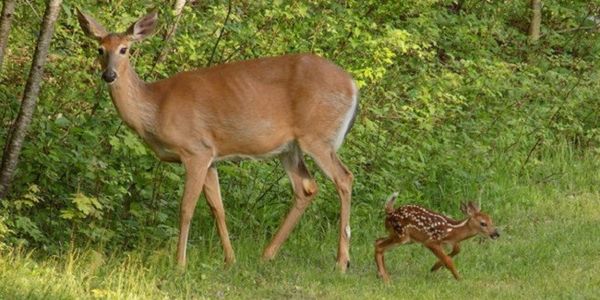 Charge Killer of Tiburon Doe and Fawn with Animal Cruelty

A doe and her young fawn were a familiar and welcome sight in a neighborhood in Tiburon, an upscale town in Northern California.

But when the two started eating new plants in the yard of resident Mark Dickinson, he decided to do something about it. He didn't install a fence or use any deer repellents. He didn't make noise to chase away the mama and her baby.

Instead, Dickinson grabbed a high-powered pellet gun equipped with a scope, laser beam and flashlight attachments. He aimed it at the two deer and shot them both in their sides.

The doe and fawn suffered agonizing and painful deaths, according to a Tiburon police sergeant.

"To kill two innocent animals like this and make them suffer is really egregious and we’re pretty concerned," said a spokeswoman from the Marin Humane Society.

Dickinson's lawyer claims his client had no intent to be cruel or to harm the deer. He was only trying to scare them away from his new, expensive landscaping.

If that was truly the case, Dickinson could have dealt with the deer in a much more humane way than shooting them with a high-powered pellet gun.

The innocent doe and her young fawn were maliciously and intentionally killed by Dickinson. Please sign and share this petition urging the Marin County District Attorney’s Office to charge him with felony animal cruelty.
Sign Petition
SHAREShare With FriendsTWEETEMAILEMBED
Sign Petition
See more petitions:
You have JavaScript disabled. Without it, our site might not function properly.