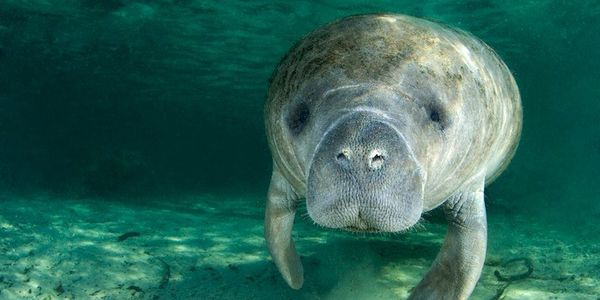 Hundreds of manatees are coming up dead in Florida. Sickly water and climate change are to blame.

In the first three months of 2021, already more than 400 manatees have perished in Florida — an alarming number that's far outside of any normal amount. To make matters worse, these goofy-looking marine mammals aren't just beloved in Florida. They're also classified as a threatened species by the federal government, and these most recent deaths are pushing the gentle herbivores closer to endangerment.

Scientists are still figuring out what's led to the dramatic increase in manatee deaths, but two main culprits have already been identified: climate change and pollution.

Sign the petition to force Florida lawmakers to finally take pollution and climate change seriously! They must enact new laws to tackle these death-dealing environmental problems.

Climate change has caused strange and intense changes in weather and water temperatures off the coast of Florida, which can actually cause manatees to get sick. When water temperature fluctuates too fast or too low, the foliage-feasting mammals can actually come down with a fatal illness called "cold stress."

Water pollution, on the other hand, is starving the animals to death. Sewage, agricultural, and urban run-off — as well as habitat destruction — are causing huge swaths of manatees' main food source, seagrass, to disappear. Now, baby and adult manatees are swimming around the waters off of Florida desperate for food, searching for increasingly small plots of seagrass. Researchers say more manatees are winding up malnourished and sick — when they're still alive at all.

A third problem that's amplifying this whole horrible situation is the simple fact of humans feeding the manatees. We often think we're being kind or sweet by feeding wild animals, but the truth is, we're entrapping them and leading to their demise. Manatees who are fed by humans are more likely to stick close to the coastal areas most populated by people, and these are likely to be the most dangerous areas for them to be.

There's only one way to save the manatees before human-created climate change and pollution kills them off. Demand that the Florida state legislature take action now! They must pass laws to protect clean water and reduce greenhouse gas emissions before things get worse.
Sign Petition
SHAREShare With FriendsTWEETEMAILEMBED
Sign Petition
See more petitions:
You have JavaScript disabled. Without it, our site might not function properly.

Care2
Hundreds of manatees are coming up dead in Florida. Sickly water and climate change are to blame.
SHARETWEET