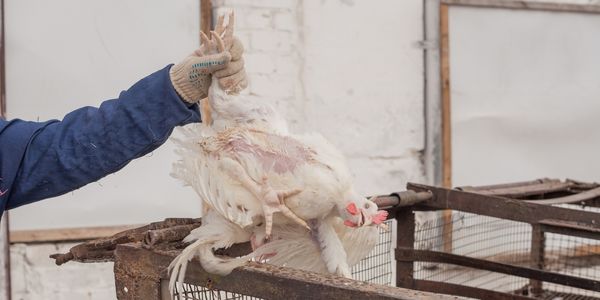 Big banks have been funding animal cruelty and torture for years. It’s time for a change.

Big banks have been bankrolling factory farms from the start, knowing that if they funnel their undepletable funds all into one part of the industry, they will have total control over the market. The only reason factory farming has become so synonymous with our global food systems is that these financial institutions choose to prop it up, favoring their own bottom line over the health of animals, humans, and the planet.

Sign the petition and join activists like Jane Goodall in demanding that the World Bank's International Finance Corporation (IFC) divest from factory farming, and put that money towards more sustainable and compassionate animal farming systems.

Since 2010, IFC has pumped almost two billion dollars into the factory farm industrial complex. Imagine the suffering that could have been avoided had those billions of dollars instead been invested in animal health and welfare -- after all, healthy animals live longer, produce more, and produce better quality products.

But this is a classic case of the big players trying to corner the market -- instead of investing in small-scale, sustainable, and diverse farms, they are essentially creating a hostile environment where a few powerful people pull the strings for the entire world's food sources. This will only carve out more food and economic inequality -- an issue that IFC claims it was founded to fight. It's consolidated control, and the only people who win are those who are already in power.

The scale of the world's factory farming problem does not only translate into animal suffering. The industry is also one of the top contributors of air and water pollution, as well as the deforestation of the world's trees, aka the earth's lungs. Experts warn that if massive financial institutions like IFC do not transfer their support to more environmentally friendly methods of food production, there will soon be little left of the earth's vital lifegiving resources.

Environmentalists are pushing for this divestment in the midst of the COVID-19 pandemic, which is most likely a zoonotic disease -- a disease that transfers from animals to humans. Humankind's relationship with wildlife and farmed animals created the ideal environment for the coronavirus to thrive -- eliminating biodiversity, destroying habitats of wildlife in favor of building cages for livestock, overusing antibiotics on farmed animals to the point of resistance...the list goes on and on. We cannot risk another pandemic. Scientists say our current ways of doing things all but guarantee one.

We need the big players to get on the right side of history. Sign now and demand that IFC divest from factory farming, and invest in humane, sustainable practices...and our future!

Care2
Big banks have been funding animal cruelty and torture for years. It’s time for a change.
SHARETWEET