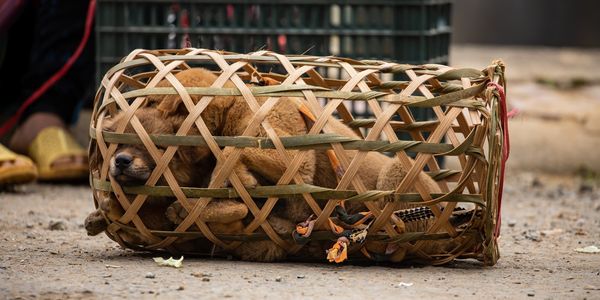 This year, like every other since 2009, the city of Yulin is gearing up for a festival that the majority of Chinese people and activists vehemently oppose. It's the Yulin Dog Meat Festival, and in its most popular years it saw the brutal, public slaughter of nearly 15,000 dogs.

Sign the petition and implore the Chinese Government to cancel the Yulin Dog Meat Festival!

Like most farmed animals raised for consumption in any country, these dogs are treated abhorrently. But that's just the thing -- many of the dogs slaughtered at Yulin are not from farms. Many are stolen out of heartbroken families' homes and yards, while others are strays that were snatched from the street. Some witnesses have seen dogs arrive at the festival with their collars still on, a tragic reminder of the hole they left in someone's home when they were kidnapped. Over 60 million dogs are registered as pets in China, a number that continues to increase year after year, while the demand for dog meat plummets. Yulin is frankly a complete misrepresentation of the attitudes in China, and continuing to allow it or promote it is shameful.

Stolen, snatched, or farmed dogs are brought to Yulin on crowded, filthy transport trucks without water, food, or room to move. They are handled so roughly, tossed about in their cages or grabbed by limbs and necks, that most do not arrive without some sort of injury. Some do not even make it to the festival grounds, dying of suffocation or dehydration enroute. At the festival the dogs are kept alive, tied or caged tightly, so that they can be brutally bludgeoned to death in front of customers. It is a harrowing ordeal for these poor pups, and it also raises many concerns for the spread of disease. Most experts believe the novel coronavirus, which has killed nearly 4 million people worldwide, originated in a "wet market" like Yulin's. Wet markets --which exist in many countries including the United States --are markets where animals are kept alive, stressed, densely packed, and are then killed on site where their blood, urine, feces, and hair combine, all in close proximity to people. Dog's kept and killed in this way specifically pose a risk for spreading cholera.

Although the tradition of eating dog meat can be traced back thousands of years, the Yulin Dog Meat Festival only began in 2009, founded by dog meat traders that were trying to boost their plummeting sales. This festival began in the face of national and global decline in demand for dog meat.

There are dozens and dozens of animal welfare groups within China that vehemently oppose the festival, including Beijing Mothers Against Animal Cruelty, Zhejiang Animal Protection Association, and Hainan Small Animal Protection Association. In fact, the majority of people within the country are against eating dogs. In 2020, when Shenzhen became the first Chinese city to ban dog meat consumption, a whopping 75% of nearly 400 million Chinese citizens polled said they supported the decision.

Dogs have for centuries been domesticated and bred to be humans' counterparts, working with them on farms or living with them as companions and family members. China formally recognized this perspective with another 2020 decision, this time across the entire nation, to reclassify dogs as companion animals. Before, they were technically livestock, even though polls taken as recently as 2019 show that close to 70% of folks in China have never even eaten dog meat.

The cruelty of Yulin coupled with the overwhelming and growing belief in China that dogs are family, not food, should say enough. The Chinese government must put an end to the dog meat trade, and their first step should be canceling Yulin, which is scheduled to start on June 21. Sign the petition and demand that the 2021 Yulin Dog Meat Festival be stopped before it begins!