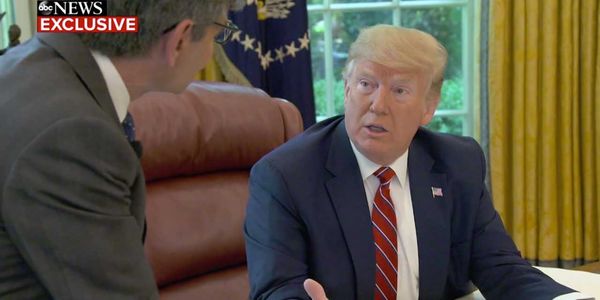 In a move as stunning as it was brazen, Trump admitted to ABC's George Stephanopoulos that he would indeed be open to getting dirt on political opponents from foreign entities in 2020. Because nothing really drives home his constant refrain of "no collusion" quite like… being open to more collusion.

His admission is a lot of things, but most worryingly, it is an open invitation for international cyber warfare. He is inviting any country that wants to curry favor with his administration to hack into Democratic servers and help the Republican Party win in 2020; in effect, the president of the United States is encouraging foreign actors to launch cyberattacks on other Americans.

To be clear, the FBI Director has already come out and said that any campaign should reach out to the FBI if contacted by a foreign entity because it's illegal. And it was illegal when Don Jr, Paul Manafort, and Jared Kushner took a meeting in Trump Tower for dirt on Hillary Clinton. The only reason that no charges were filed was because Mueller conceded that they didn't know what they were doing was unlawful. But they know now, which makes Trump's open invitation to conspire against Democrats to influence yet another election all the more egregious.

Trump might have played dumb for the entirety of the Mueller investigation, but this is concrete evidence of his willingness to do exactly what he's been denying for the last two years again.

We know that because it's something campaigns pay for. This isn't rocket science, folks.

We, the undersigned, demand Congress begin impeachment proceedings against the president.

Because if this interview tells us anything, it's that not only does Trump not regret Russian interference in the 2016 election, but that he's willing to facilitate even more of it heading into 2020. There is no excuse for inaction; impeachment here and now is the only option.