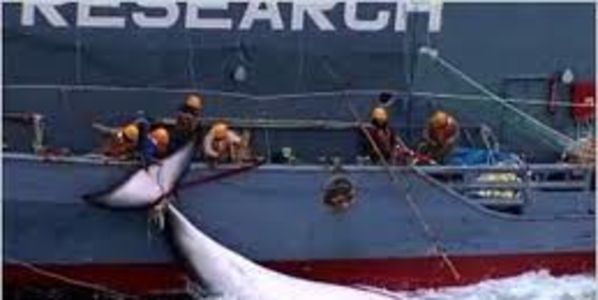 Urge The Court in The Hague to Stop Japan from Killing the Whales!

March 2014: The future of Japan's whaling activities in the Antarctic could be reviewed as the International Court of Justice in The Hague has announced that it will deliver its preliminary judgment in the case between Australia and Japan at the end of the month.

In the summer of 2013, the Australian government took Japan to the ICJ, the principal judicial arm of the United Nations, in a bid to expose the true nature Japanese scientific research programme under which it has previously killed over 7,000 in the Antarctic region. For despite an international whaling moratorium in force since 1986, Japan continues to catch whales in the Antarctic under the 1946 treaty that allows unlimited whaling for scientific research.

Yet critics say this is just a smokescreen and they are really being hunted for their meat, which is eaten by many Japanese consumers who consider it a delicacy.

During the hearing, representatives from the Australian Government outlined how useless Japanese whaling is in scientific terms, stating that the "research" programme only makes use of a small part of the whale, whilst the rest is turned into edible products and a third discarded - thus confirming that these hunts are effectively commercial whaling in disguise and just an excuse for Japanese whalers to get around the current international ban on such hunts.

The Australian legal team also pointed out to the court that Japan has never explained why it needs to kill thousands of minke whales, also undermining the claim that it's in the name of research. But speaking during the second week of hearings, Japan's deputy foreign minister, Koji Tsuruoka, said his country had the right to hunt and kill the marine mammals for scientific research.

"Japan is conducting a comprehensive scientific research programme because it wishes to resume commercial whaling, based on science, in a sustainable manner," he said.

Both countries have promised to abide by the court's decision and you can watch highlights from the court case on the United Nations web tv site.

Full credit for the article/text that has been used as a petition material goes to the Source,

which can be found here:

Care2
Urge The Court in The Hague to Stop Japan from Killing the Whales!
SHARETWEET