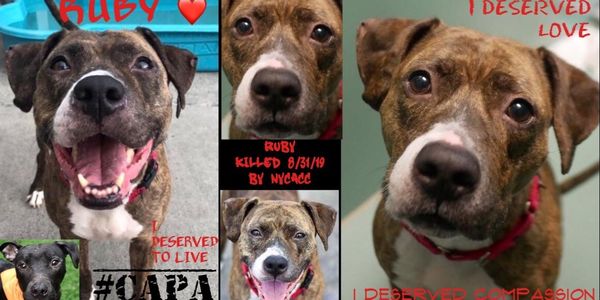 "RUBY is a gem of a pup!  She is wiggly, sweet, affectionate, playful, absolutely adorable and people pleasing perfection!  Ruby is incredibly endearing, soft, loving and she was a family pet who lived with 2 young children she adored and 2 other dogs who were her pack.  Respectful, relaxed and playful with everyone!

That was Ruby's bio before the NYCACC mercilessly killed her!  This sweet, beautiful girl had a rescue and fosters and adopters that wanted her!  She had her saviors who wanted to save her from this high-kill shelter!  Sadly it wasnt meant to be...NYCACC denied everyone who wanted Ruby and killed her anyway!?!?

How? How can something like this happen?  It happens because there is no accountability for these shelters!  There is noone to stand up for the animals and be their voice.

We are the Anti-Dogfighting Campaign Worldwide Organization and we believe animals deserve a safe haven when entering a shelter. They should be provided proper care, medical treatment, socialization, training, compassion and to be treated humanely. These are things that animals as sentient beings deserve and are entitled too.

We the ADFC  are asking for the Companion Animal Protection Act, the model  legislation for shelter reform,  to be passed in New York. This legislation is desperately needed to ensure that alternatives to killing healthy, adoptable animals are implemented.  The ADFC strives to be a strong voice for the voiceless and shelter reform is something that the ADFC stands strongly behind.

CAPA would require shelters to have fully functioning adoption programs including off site adoptions, use of the internet to promote their animals and varied adoption hours to facilitate the public.

CAPA would require shelters to be transparent with their statistics.

CAPA would prohibit the killing of a dog or cat when there is available kennel space or the animal can be transferred to another facility.

CAPA would prevent shelters from killing animals when a qualified rescue group is willing to save that animal.

CAPA would require shelters to notify participating rescue groups of all animals who will be killed and would grant registered 501c3 organizations the right to rescue these animals on demand.

CAPA would end the practice of killing 'owner surrendered' animals within minutes of arrival at the shelter without ever giving them a chance at adoption.  It would also put an end to 'Silent Killing.'

CAPA would put an end to animals losing their lives for senseless reasons such as treatable colds and kennel cough, which are usually acquired after entering the shelter.  They wouldn't die for simple behavior issues like mouthing on leashes or not getting along with other dogs.  They wouldn't die from being confused and afraid in a terrifying unknown environment.

We the Anti-Dogfighting Campaign Worldwide Organization believe that the Companion Animal Protection Act will impact shelter animals in the best way possible.  We ask that you stand with us and support this very important piece of legislation for New York.