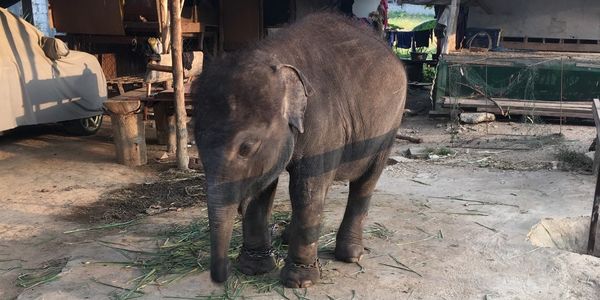 2 years ago whilst visiting Phuket in Thailand I came across a baby elephant who was being used for begging and kept tied up alone at night. I saw her owner lead her to and from her place of work and where she's kept using a stick with a bullhook on the end, which I saw him hit the baby with.

Unfortunately, this is how her life has continued to this day. I recently drove past where she lives and went to check on her. I found her situated down a dirt track alone and quite clearly distressed, her head bobbing constantly. All four feet were chained together so she was unable to move, stretch her legs or lie down.

As far as I can see she has no access to fresh water or food and is completely on her own. As elephants are highly social animals, this can only be causing her anguish. To think that she's only young and this is how she spends her life is pretty heart-breaking, which is why I'm starting this petition.

I've since contacted the charity Thailand Elephants and we are working together to raise awareness of the baby elephant's life – who we had named Pip but now believe to be called Meena.

As 'rescuing' and rehoming Meena is not a long term solution to ending suffering for all elephants, Thailand Elephants are talking to their contacts in Thailand to see what can be done to improve welfare standards for both Meena and other captive elephants by working to bring further awareness to the Thai Government.

We aim to present this petition to the Phuket Livestock Department and the Tourism Authority of Thailand, asking for Meenas' standard of living to be improved and for the laws protecting captive elephants to also be improved and upheld.

We are keeping this information and our aims updated as our campaign to help Meena, and others like her develops.