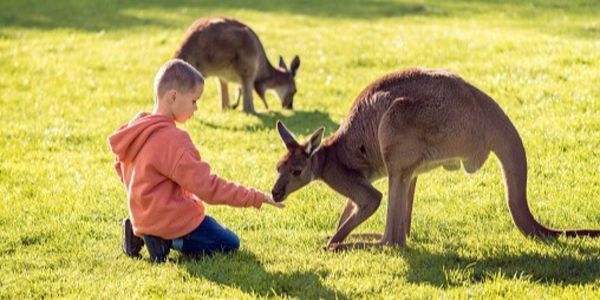 In September of last year, the internet blew up with rage after a video of a man, slitting an already injured Kangaroo's throat, went viral.

People in Australia and abroad demanded that law enforcement punish the killer to the fullest extent of the law. But while this story was unbelievably tragic, what happens to kangaroos every day in the outback is far worse.

A recent documentary which looks at Australia's complicated relationship with one of its most iconic creatures revealed that millions of the hopping marsupials are slaughtered annually — 5.2 million in 2012 alone. Farmers and ranchers consider them a pest and they have schemed up a way to get rid of them and make a pretty penny along the way.

The kangaroos are used for meat, leather and pet food and are big business. In fact, many of us might be using kangaroo products right now and not even know it. But because they cannot be farmed, they must be brutally killed at gunpoint with no regard for their suffering. In some cases, babies are even pulled from their dead mothers' pouches and bashed to death. It is cruel and senseless.

This cruelty continues because it is profitable. Traders, hunters, pet food companies and other stakeholders have found a way to make money out of the kangaroo's pain. If we take away the profit, we take away the motive to kill.

Currently, California is the only state to ban kangaroo products. As the 6th largest economy on Earth the fact that kangaroo meat and other products can't be sold in the Golden State hits hard, but if more states joined the ban, we could have even a larger impact in ending this cruelty.

Please sign the petition to say you are against the import of kangaroo products in your state. Then contact your representative and ask them to propose a ban to stop it.
Sign Petition
SHAREShare this petition with friends!TWEETEMAILEMBED
Sign Petition
See more petitions:
You have JavaScript disabled. Without it, our site might not function properly.