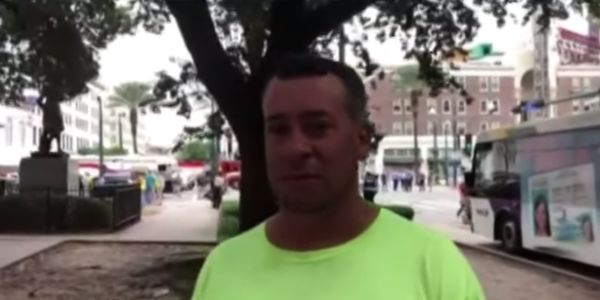 This Man's Testimony Could Save Lives, But ICE Deported Him Anyway

Delmer Ramirez Palma had been living and working undocumented in New Orleans for almost two decades. For the last three years, he had been fighting deportation to try and remain in the States with his family. His case was moving forward, and in mid-November, he had expected to check in with Immigration and Customs Enforcement (ICE) to continue the process. But that's not what ended up happening.

Sign to help bring Ramirez Palma back to the U.S. to be with his family.

On October 12th, Delmer Ramirez Palma was working construction on the new Hard Rock Hotel. The building rose some 18 stories. As Ramirez Palma was working away, he noticed something troubling - the floor underneath him was moving. It was as if an earthquake was shaking the structure. The trembling worried him. It was not the first time he had felt unsafe while working on the new hotel. But anytime he voiced his concerns to management, he was ignored and told to get back to work.

On October 13th, the building collapsed, leaving 12 of his coworkers injured and three dead.

After the collapse, Ramirez Palma told officials about his previous concerns. He told investigators about his repeated attempts to sound the alarm. In fact, the Louisiana Workforce Commission (formerly the state's Department of Labor) considered his information so useful they called him a "crucial witness" in the investigation. But while state authorities were counting on Ramirez Palma to help them find the cause of the collapse, ICE was working to deport him. He's now back in Honduras, separated from his family, and unable to testify against those responsible for the disaster.

The separation of families and deportation of people working towards legal status should worry everybody, but Delmer's case is specifically troubling. Under what the Washington Post calls "a long-standing agreement between the Department of Homeland Security and the Labor Department," ICE isn't supposed to target workers who are involved with an ongoing labor investigation. Yet they chose to disregard the agreement and send him to Honduras anyway. His removal hampers investigators' search for answers.

Delmer should have never been removed from the U.S. He could be the key to finding out what happened to the Hard Rock Hotel, and he should be with his family. His information could potentially uncover negligence and ensure that nothing like this ever happens again.

American workers are less safe because of what ICE did. Now it's time to demand Delmer's return. Please sign the petition and tell ICE to return Ramirez Palma back to his home in the U.S. where he belongs.
Sign Petition
SHAREShare this petition with friends!TWEETEMAILEMBED
Sign Petition
See more petitions:
You have JavaScript disabled. Without it, our site might not function properly.

Care2
This Man's Testimony Could Save Lives, But ICE Deported Him Anyway
SHARETWEET