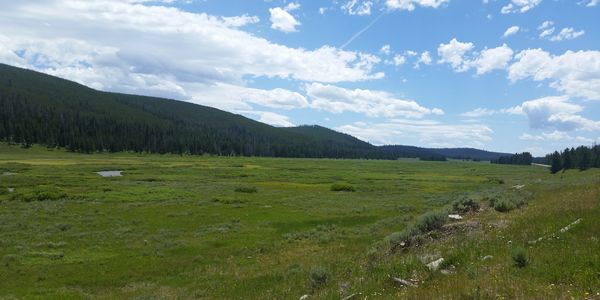 On November 9th, 1990, retired Gallatin County Sheriff's Deputy Brad Brisbin received a phone call from close friend Larry Moore, asking for immediate assistance to offload a trailer more than 90-miles away. Brisbin told his wife of his plan to assist Moore and was never seen nor heard from again.

Moore never wavered in his innocence while insinuating Brisbin had run away in contradictory and implausible statements to law enforcement about the events of November 9th. Though Brisbin's body hadn't been found, two years after his disappearance, Moore was convicted of murdering Brad Brisbin. Ever-changing statements, the creation of forged letters, tampering with blood evidence with battery acid, and DNA from brain tissue found in Moore's camper lead the jury to the conviction.

It is believed that due to the controversy of the use of DNA, Moore was leniently sentenced to 60 years and given a reduced criminal charge for what was prosecuted and believed to be premeditated murder.

Less than two years into serving his sentence, the victims of  Brisbin's murder received a devastating blow due to an archaic law and the technicalities of Moore's sentencing. After serving less than two years of 60, his sentence was reduced by half - to just 30 years with eligibility for parole every 5 years. It was deemed a grave technicality by many in the law enforcement community.

Moore had often suggested Brisbin had run away to start a new life in varying tales. Without a body and the sensationalism and national debate over the validity of evidence of the case, Brisbin's children were left growing up with seeds of doubt over the death of their father. Faces similar to their father's resulted in extreme social anxiety and panic. Though the case was closed, there was no closure.

Barely three years into his sentence, Moore and his cellmate were caught in the act of placing a bomb in the office of Mike Mahoney, the Warden of Montana State Prison. Moore faced 5 federal counts but was able to avoid prosecution and the potential addition of up to 60 years to his prison term by negotiating that the federal charges be dropped in exchange for information about the disappearance of Brad Brisbin. Warden Mike Mahoney never was served justice for the crime committed against him, but in 1995, the family of Brisbin received closure for any doubt over the disappearance of Brisbin when Moore lead officials to not only the grave and body of Brad Brisbin, but the buried murder weapon as well.

Brad Brisbin had been shot multiple times in the back, head, and chest with a .357 pistol, and then buried in a gravel pit on property belonging Moore. Moore admitted to the killing, although his reasoning behind it still wavered, ranging from Brad Brisbin attempting to kill himself to claiming self defense and multiple alternate stories. It was speculated from the beginning, however, that Moore believed that his estranged wife (who had history of domestic violence at the hands of Moore and subsequently had restraining orders against him) was having an affair with Brisbin, who had been assisting her due to his law enforcement background. Over the contact and belief of an affair, Moore calculatedly planned and committed the murder.

Every five years for the last 27 years, the victims of Larry Moore have had to plea to the Montana State Board of Pardons and Parole to uphold Moore's full 30-year sentence that was vastly reduced from it's full potential with the removal of the added federal charges.

Every five years for the last 27 years, Moore has been given the opportunity to plea his case before the parole board.  Moore has never atoned for his actions, never apologized to his victim's family, or accepted culpability without an underlying reason that directly benefited him. It has been Moore's method of operation since the day he murdered Brisbin to recalculate facts as he deems necessary and to only speak the truth when self advantageous. He has proven himself to be a methodical, clever, calculating individual with his own interests at heart. Per the Bozeman Daily Chronicle, "Moore's ever-changing story should put the parole board on notice. The board should never lose sight that they are dealing with a cool, calculating killer capable of methodically lying to the court, his family - even his own lawyers - to escape justice for his most heinous crimes". At Moore's 2015 parole hearing, in person, former Warden Mike Mahoney described Moore as a "sophisticated, intellectual sociopath".

On April 30, 2020, for the fourth and final time, Moore is up for parole. Moore will be released in 2023 regardless of what happens during this hearing. The family of Brad Brisbin aided in providing Larry with the ability to request parole and see his guaranteed release in 2023 when they negotiated away Moore's five federal charges and potential 60 added years in order to bury a father, husband, son, brother, and friend.

We the undersigned ask that on April 30, 2020, the Montana State Board of Pardons and Parole deny parole to Larry Thurman Moore, Inmate A034257. We believe that he is a risk to society, a threat to his victim's family, a threat to his own estranged family, as well as any individual who aided in his conviction.

We ask that Larry Moore remain detained and serve the entirety of his reduced sentence until his final release date in 2023.