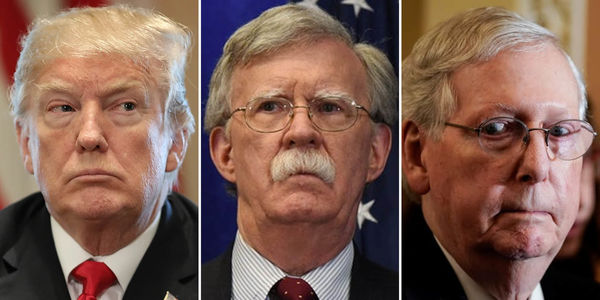 The evidence against President Trump in his historic impeachment trial is exhaustive and damning –  enough to remove him from office several times over, in fact. But, because apathy for the overwhelmingly obvious is sadly commonplace in today's GOP, acquittal in the Republican-held Senate remains a near certainty throughout the proceedings.

And then came John Bolton. Or a draft of his unpublished book, anyway. On January 26th, the New York Times dropped an atom bomb-sized revelation in the form of a manuscript – ironically leaked by anonymous sources in the White House – penned by Trump's former National Security Advisor. Bolton lays out in plain language the president's corrosive scheme to withhold nearly $400 million in military aid to Ukraine until the beleaguered nation announced bogus investigations into Trump's political rivals in the Democratic party.

Bolton, a senior advisor with firsthand knowledge, directly implicates President Trump, Rudy Giuliani, Attorney General Bill Barr, and chief of staff Mick Mulvaney in the ill-fated bribery scheme. Bolton also reveals that he, along with Secretary of State Mike Pompeo and Secretary of Defense Mark Esper "collectively pressed the president about releasing the aid nearly a dozen times" throughout the summer of 2019.

It is abundantly, laughably clear that witnesses – John Bolton chief among them – should immediately be called in the impeachment trial. Acquitting the president without summoning a single witness will do irreparable harm to our democracy.

Demand that the US Senate fulfill its solemn obligation to conduct a fair and impartial trial and subpoena John Bolton without further delay.