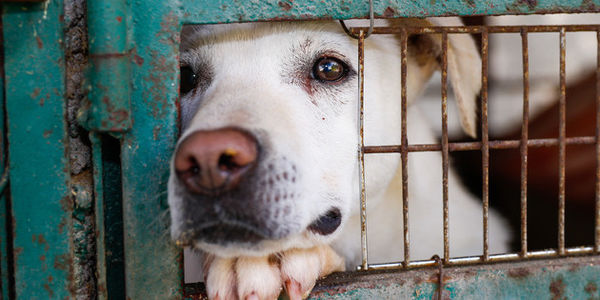 171 dogs were almost slaughtered for their meat. Then local activists in South Korea saved them.

People around the world are standing up against the dog meat trade, and one of the biggest victories was just in South Korea, where local activists just rescued 171 dogs who were destined for slaughter!

Despite the fact that residents of South Korea have been speaking out against dog meat, the country still hosts the annual Bok Nal festival for dog meat-eating every July. Each year, thousands of dog meat farms raise and butcher approximately 2 million dogs both for this festival and for more daily consumption.

It's time for the South Korean government to listen to its people and crack down on the dog meat industry, now!

During the most recent dog rescue, activists from the Humane Society International (HSI) and local animal welfare groups found pups locked up in near-starvation conditions. Confined in sparse, empty metal cages with insufficient food or water (when there was any at all), some of these animals were discovered trapped alongside the dead bodies of other dogs who had passed away in the same cage with them, apparently from starving to death. Other living animals were riddled with infections and diseases.

Each of these dogs was destined for death in one way or the other — either through malnutrition and dehydration, or through intentional slaughter. Most dogs who face butchering are killed through extremely brutal means — primarily electrocution and hanging.

Luckily, now, each of these 171 dogs is safe and being nursed back to health with the help of veterinary care, and most will become eligible for adoption by loving human families. All dogs deserve this kind of hope and happy ending. We have to fight for them!

HSI also works to help prevent future dog-meat-breeding and -slaughtering by helping to transition former dog farmers into newer, more humane, and equally (or more) profitable forms of employment. The South Korean government should be partnering with HSI on this work to help both animals, and the farmers who need these jobs to make ends meet.

Sign the petition to urge the government of South Korea to learn from these successes and create programs to transition dog meat farmers into more ethical industries, and protect all dogs!
Sign Petition
SHAREShare With FriendsTWEETEMAILEMBED
Sign Petition
See more petitions:
You have JavaScript disabled. Without it, our site might not function properly.

Care2
171 dogs were almost slaughtered for their meat. Then local activists in South Korea saved them.
SHARETWEET