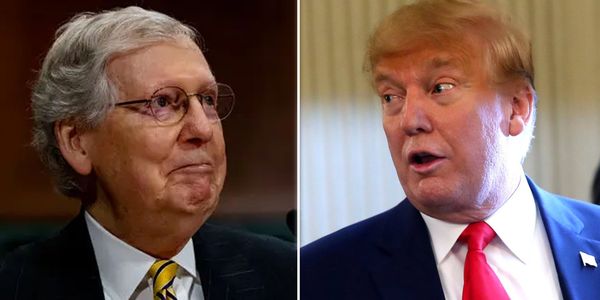 Demand McConnell recuse himself from the Senate impeachment trial after he admitted coordinating with Trump!

With President Trump now impeached for the crimes of abuse of power and obstruction of Congress, attention has turned to the Senate, where Republican Leader Mitch McConnell will oversee historic proceedings on Trump's potential removal from office. The charges put forward are serious, the facts largely uncontested.

The flailing narratives put forth by Republicans, however, reek of desperation and obfuscation. Attempts to ignore, deflect, and defend Trump's systemic abuse of power by the GOP thus far have been galling by any measure, but Sen. McConnell has indicated things are about to get much worse.

In a jaw-dropping interview with Sean Hannity on Fox News, McConnell baldly admitted that the President stood "zero chance" of being removed from office and that Senate Republicans would work in "total coordination" with the White House on the trial's proceedings – a stunning admission of impropriety, even by the GOP's abominable standards.

True, impeachment requires the judgement of political figures, but the seriousness of a formal trial before the full Senate demands a sober, somber examination of the facts, not a predetermined acquittal by political cronies serving an audience of one. In fact, prior to the trial, each senator must swear an oath that they "will do impartial justice according to the Constitution and laws." McConnell isn't even pretending that he will abide by that oath — in flagrant defiance of our nation's laws and constitution.

If an ordinary citizen were called for jury duty and notified the judge – in advance – that she would work in total coordination with the defense before hearing any evidence, she would be rightly ridiculed and dismissed. McConnell should be held to no less a standard.

Demand that Mitch McConnell recuse himself from the impeachment trial of President Trump for undermining due process and his craven promise of partiality. History is watching, and democracy is at stake.

Care2
Demand McConnell recuse himself from the Senate impeachment trial after he admitted coordinating with Trump!
SHARETWEET