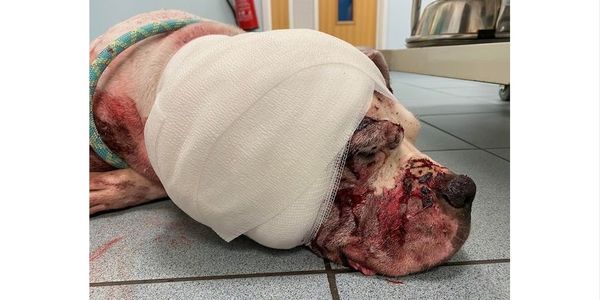 Ruby the bulldog was brutally attacked with a machete! Demand justice!

A man in the United Kingdom who had just lost his father was on his way to make funeral arrangements when he suddenly had to face yet another tragedy. He saw a dog so battered and bloody on the side of the road that he thought she must have been struck by a car just moments before. But once he rushed her to get help, those who saw Ruby the 9-year-old bulldog knew this was not as simple as a traffic accident. Ruby had a massive, deep wound on her head that her rescuers now think was inflicted by a machete.

Sign the petition urging the local law enforcement to find the individual who attacked Ruby at once so that no other pups suffer like she did!

Ruby is alive and healing, but whoever did this to her certainly did not want her to survive. Veterinarians say that the wound inflicted on the pup's head made them think her assailant was trying to chop her ear off. But they did not break her spirit. Those caring for Ruby now say that even though she must be in a great deal of pain, she is as sweet as can be -- wagging her tail at her caretakers and trying to lick their faces. It's like she knows that she is absolutely safe now, no matter how horrible an ordeal she went through.

But until her attacker is found, dogs, other animals in the area, and even people are not safe. Apparently, Ruby had run away in the night and was found around 9 am the following morning. Veterinarians think that she was attacked very close to the time that she was found based on the amount of blood the sweet girl lost. This timeline offers up enlightening details, and should give local law enforcement a clear starting point. Time is of the essence.

An attack this violent and cruel serves as a red flag. Whoever is behind this  needs to be apprehended at once before they hurt themselves or another living thing. Too often, animal abuse cases like this one serve as precursors for violence against people.

Please use your voice to speak up for Ruby by signing the petition asking that Merseyside Police find those responsible so that they can get the help they need, and so no other animals or people fall into harm's way!

Care2
Ruby the bulldog was brutally attacked with a machete! Demand justice!
SHARETWEET