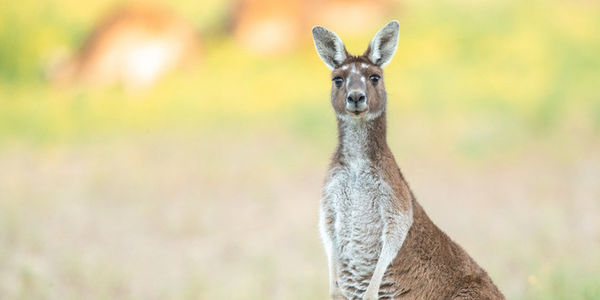 Kangaroos languish in captivity. But in a quarter of all U.S. states, their misery is totally legal.

Despite the fact that kangaroos are dangerous exotic animals who belong in the wilderness of Australia — not in a backyard cage of a suburban U.S. home — in one-quarter of all U.S. states, you can still own a kangaroo and hold it captive for the rest of its natural life with no repercussions.

The good news is that in 37 out of the 50 U.S. states, any form of kangaroo ownership is completely banned. But that means that in the remaining 13 states, this type of cruelty is still fair game.

Sign the petition to demand that each and every U.S. state finally outlaw kangaroo "ownership" once and for all!

Out of these 13 kangaroo-captivity states, the majority at least require some sort of permit that must be administered by government officials. But we know that some negligent or corrupt local authorities have often bestowed permits on completely fraudulent "sanctuaries" that turn out to be just another abusive, tourist-trapping roadside zoo.

Even worse, three states — South Carolina, West Virginia, and Wisconsin — have no statewide regulations at all requiring kangaroo owners to first gain a special permit. In these areas (barring any local legislation), it is completely legal for any old random person to go out and get themselves a 'roo, just because they want to.

This is just downright disgusting. Why does anyone need to lock up a wild creature, stripping it of its freedom, just to condemn it to a life of misery and loneliness in some sad, sorry enclosure? Kangaroos belong with their kindred animals, running and jumping and hopping free, with their full habitats available to them.

On top of that, kangaroos can do real damage. Owning one is a serious responsibility, and if not handled appropriately, can lead to loss of life or limb.

Urge the state lawmakers and governors in South Carolina, West Virginia, Wisconsin, and the rest of the U.S. states to ban people from owning kangaroos!
Sign Petition
SHAREShare this petition with friends!TWEETEMAILEMBED
Sign Petition
See more petitions:
You have JavaScript disabled. Without it, our site might not function properly.

Care2
Kangaroos languish in captivity. But in a quarter of all U.S. states, their misery is totally legal.
SHARETWEET