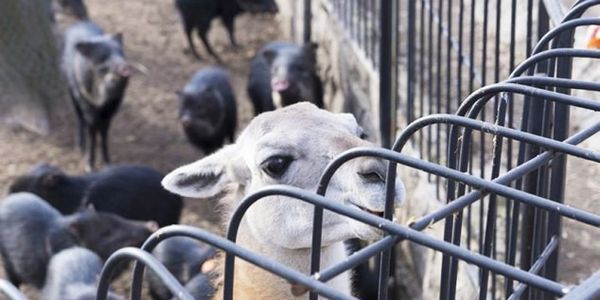 URGENT! Ukraine- Do Not Let Your Zoo Animals Starve to Death!!

According to a Facebook page created shortly after the zoo's plea, many heeded the call to action: An update on the Facebook group posted Saturday, on March 8, said the animals are OK for now.

"We just got back from the zoo- literally the entire city had brought bags and bags of food to donate: cabbage, bread, carrots, beets, greens, you name it! The zoo staff was using tractors to haul the food around.We spoke to the zoo director and she said they'd also received some cash donations," the page announced.

Animals in a Ukrainian zoo have been left to die of starvation in the wake of the country’s political turmoil, it has been claimed.

The director of Kharkiv Zoo blamed Ukraine’s warring politicians for failing to provide funds, saying the zoo only have enough food to last until Monday, March 10.

Alexey Grigoriev is said to be "in tears"over the plight of the animals, and has pleaded with the prime minister for help.

“Our animals are not fighting for power, they do not share anyone's political views, they just want to live," said a statement by the zoo. "Without emergency measures, our completely innocent animals will start dying next week."

A pregnant elephant was hungry and on the point of expiring from exhaustion, it was claimed. Local reports say funds earmarked for the zoo have been sent elsewhere.

A letter sent by the director Grigoriev to Ukraine's prime minister said: "The Kharkiv zoo animals on the verge of starvation." Suppliers have been providing food for free for three months but have now refused to provide more, he said, pleading with the government for immediate action.

The country - partially invaded by Russia last week - is also on the point of bankruptcy.

A local campaigner for the zoo, Olga Sitkovskaya, said: "I spoke to the director and, sorry for this detail, but this clever, strong adult man burst into tears of helplessness.”

The city allocates funds needed for maintaining the zoo, but Kiev redirects the money to some of its needs. As a result, the animals in the zoo, are in a catastrophic situation.

"Along with the whole country, our zoo is living through difficult and terrifying times,” said the zoo statement. By Monday, we will have nothing with which to feed the animals.”

The zoo dates from the 1890s and survived two world wars.

Do not allow, now, their lives to be lost!! These animals are your responsibility, feed them!!

Care2
URGENT! Ukraine- Do Not Let Your Zoo Animals Starve to Death!!
SHARETWEET