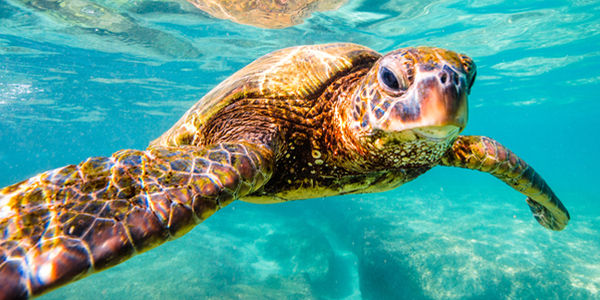 As the world's largest cruise line, Carnival Cruise Lines has the power to help stop the suffering of endangered green sea turtles at a tourist trap in the Cayman Islands. Unfortunately, the cruise line continues to turn a blind eye to the animal abuse at the facility that also farms turtles for meat.

The Cayman Turtle Centre: Island Wildlife Encounter (formerly, the Cayman Turtle Farm) has been targeted by animal rights groups for years over concerns about how it's mistreating its resident sea turtles, and the health risks turtle interactions with the public pose. In 2012, World Animal Protection released a shocking report outlining numerous problems there, and included it on its top 10 list of the cruelest wildlife attractions in the world last year.

Problems range from allowing public interactions with sea turtles that cause stress for turtles and put visitors at risk of contracting diseases, to the cramped and overcrowded conditions. The facility's turtle treatment has led to abnormal behavior, serious health and genetic issues, thousands of deaths from disease, and even aggression and cannibalism.

World Animal Protection has been working to get Carnival Cruise Lines to stop bringing tourists there, but despite being made aware of the numerous problems at this facility, the company has failed to end its ties.

Please sign and share this petition urging Carnival Cruise Lines to stop supporting this cruel business. Carnival must stop putting profits over the welfare of these highly endangered animals and stop bringing unwitting tourists to fund this horrible facility.

Read the World Animal Protection report on the facility here.

As someone who is concerned with animal welfare and the plight of endangered marine species, I was extremely disappointed to learn that Carnival Cruise Lines is supporting the Cayman Turtle Centre: Island Wildlife Encounter in the Cayman Islands.

While sea turtles are no doubt a popular draw for tourists who want to see them up close and interact with them, that desire is causing serious problems for sea turtles at this facility. Public handling causes serious stress and can result in injuries, and also puts visitors at risk of contracting diseases.

Behind the scenes, the facility keeps thousands of otherwise solitary and far-ranging sea turtles in cramped, overcrowded and unsanitary conditions that have resulted in abnormal behavior, serious health and genetic issues, thousands of deaths from disease, and even aggression and cannibalism.

Although farming sea turtles for their meat is supposed to take the pressure off of wild sea turtles, there's little evidence there's a real demand for it locally, and concerns have been raised that tourists are artificially inflating it by choosing sea turtle meat simply because it's being offered.

Despite its conservation mandate, there's also virtually no evidence that that released sea turtles are surviving, or boosting local populations, or that there has been any conservation benefit to releases at all. In fact, it may be having a detrimental impact on both released turtles and those in the wild.

Concerns about the mistreatment of sea turtles at this facility got it the unfortunate distinction of being featured on World Animal Protection's top 10 list of the cruelest wildlife attractions in the entire world last year.

I sincerely hope you will not continue to knowingly support this cruel business by putting profits over the welfare of these highly endangered animals and will instead stop bringing unwitting tourists to this destination.