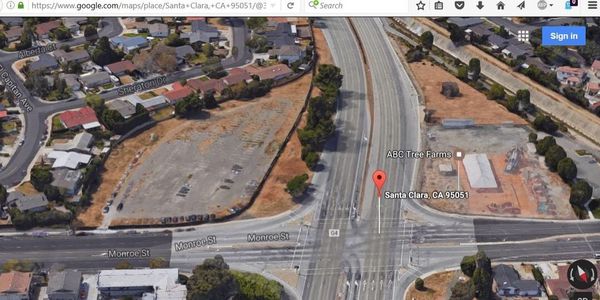 A Fremont Billionaire is proposing "Housing for the Homeless" on a 2.5 acre parcel of land located on the Southeast corner of Monroe and San Tomas. His proposal, under the company Sobrato, is to build a micro-apartment community, using 200 shipping containers in order to house poor to extremely poor adults. Under this proposal, there would be "around-the-clock" services provided to the homeless at no cost to the city.

Sobrato has urged the council to move forward despite anticipating outcry from "NIMBYS" (Not in my Backyard) a term used for residents who do not want the development anywhere near their neighborhood. Sobrato has stated that they would be in favor of "slight tweaks" to this proposal, with emphasis on the word "SLIGHT".

The propoal is for 200 low income housing units which are permamnet structures not camps ...out of which 100 units are for homeless and other 100 for low income people

It wil also have onsite services ..each unit is about 240 sqft with one bed , bath and a kitchen..it will be ADA compliant for disabled people.

What has not been stated in this proposal, is how the nearby neighborhood is already being negatively affected by the mismanaged apartment complexes to the north of this potential landing spot for the homeless. Nearly 5 blocks of mismanaged, high density, low-income housing already exists across the street. Due to these apartments and the high density living that accompanies these apartments, nearby neighborhoods are experiencing a spike in crime, drug use, alcohol use, litter and lack of available parking. The nearby neighborhood streets, which at one time were quiet are now being used as a main thoroughfare for vehicles and pedestrians. Cars are being broken into and keyed and houses are being burglarized. There have been multiple hit-and-runs associated with the extra foot and vehicle traffic and the police have been called out multiple times for "suspicious" individuals either loitering around the neighborhood or sleeping in their cars.

For those who are not in agreement, please consider the following:

A)  How would you feel having something like this sharing a fenceline with your property?

B)  Most of these proposals never turn out the way they are intended to.  The fact that this Billionaire is already urging the council to streamline this process is a huge red flag.  Also take into account how he is open to "slight" tweaks in this proposal.  What does that even mean?

C)  Take into account the issues we are already facing as a neighborhood (mentioned above).  Please put yourselves in the shoes of those living in this area and ask yourself the question "Is this really something I would want to live next to?"

F)  Lastly, understand that this is not an attack on the homeless.  Everyone deserves a roof over their head, however, not at the expense of a neighborhood that is already fighting a losing battle.  At some point in time in the near future this parcel of land will be developed and it will be developed as "low-income" housing.  However, the local community should have a say in what type of "low-income" housing is developed.

Please call and email the Mayor and City Council and voice your displeasure with this proposal:

PLEASE PUT A STOP TO THIS PROPOSAL BEFORE IT STARTS TO GAIN ANY SORT OF TRACTION.