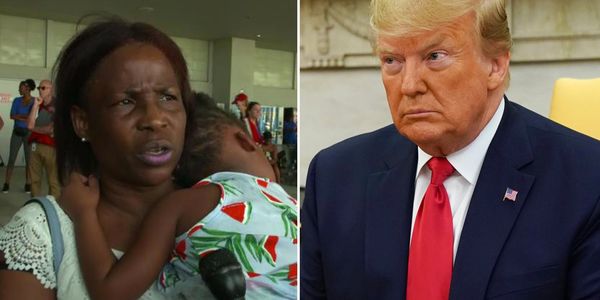 Demand Trump allow Bahamian refugees displaced by Hurricane Dorian to get to the U.S.

Even as President Trump continued to defend his bogus warning that a hurricane was coming to Alabama, 70,000 Bahamians were grappling with the loss of their homes — and in many cases, loved ones — from the real Hurricane Dorian.

Just a two and a half hour boat ride from refuge in the U.S., this should have been a time for our nation to open its arms to families in their time of need. Instead, Trump turned away more than 100 displaced men, women, and children for not having visas.

Add your name to demand an end to this disgraceful practice and allow displaced Bahamians to get refuge in the U.S.

Even Trump's acting Customs and Border Protection (CBP) chief, Mark Morgan, said of Bahamians fleeing the ravages of Hurricane Dorian, "This is a humanitarian mission… you're going to be allowed to come to the United States, whether you have travel documents or not."

The president, however, directly contradicted his appointee, stating "We have to be very careful. Everybody needs totally proper documentation. Because, look, the Bahamas had some tremendous problems with people going to the Bahamas that weren't supposed to be there." He then recycled tired, racist lies about "very bad people and very bad gang members," even suggesting that the need for international aid may be overstated.

This is of course total xenophobic nonsense. Some of the "very bad people" Trump is refusing to help are infants and their mothers who have lost homes and family. His inhumane approach to those in need is no less predictable than it is unacceptable — and we must refuse to stand for it.

Care2
Demand Trump allow Bahamian refugees displaced by Hurricane Dorian to get to the U.S.
SHARETWEET