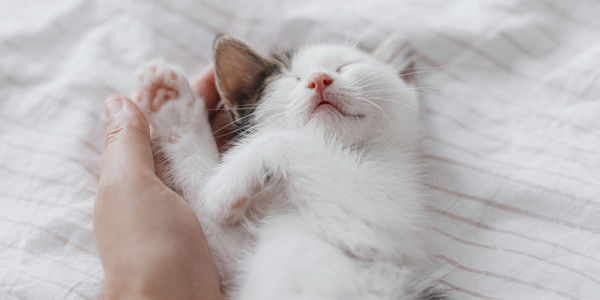 Before Stargazer the cat was adopted in a loving home three years ago, she was living in hell. The previous humans in her life had been so abusive, they left her permanently physically maimed and scarred.

When her new person met her, his heart was broken that so many people had passed up the opportunity to give this loving little creature a new lease on life. Why didn't people want her? In addition to being a black cat -- notoriously overlooked and discriminated against -- the horrific abuse she'd endured had left her without either of her eyes, and also missing one of her legs. If someone hadn't adopted her quickly, she was going to be euthanized. But this young man saw her and thought, "She's truly a little survivor."

Cruelty against animals is never acceptable -- whether it's abuse that causes disabilities and injuries in pets, or unkindness to an animal as a result of their preexisting disability.

It's not okay to rush to euthanize animals just because they're disabled. Major pet retail stores like PetCo and PetSmart must implement public education campaigns about how to lovingly care for disabled pets, and partner with local shelters to prevent euthanization of disabled dogs and cats.

But unfortunately, not everyone shared the young man's compassion for this resilient little animal. One evening, he was babysitting his nieces after his sister had moved nearby. While the children were concerned about Stargazer's appearance at first, they quickly grew to adore her and felt she was "cute."

But then the young man's sister arrived to pick up her daughters. When she saw the cat, she began screaming, scaring the animal. She accused Stargazer of being "demonic," and was furious that her brother had the little cat around her children. Then, her husband called the next day and reportedly said they would never allow their children over again, unless the young man abandoned his beloved cat.

This is a heinous way to respond to a disabled animal -- or a disabled person. Stargazer had already encountered repulsive violence. She did not deserve to continue to endure disrespect and emotional abuse.

Every year, on average, upwards of 10 million pets and other animals are "abused to death" in the U.S., according to Pawsome Advice. And this abuse often happens as part of a larger pattern, including cruelty against humans. In a survey of domestic violence survivors, approximately 71% said their perpetrator had also "targeted pets" in the home, as reported by the Humane Society of the United States. Another survey showed that in households that were being supervised because of physical abuse against children, pets were also abused in 88% of those homes.

Just because a person or animal looks different from you, or doesn't move like you do, doesn't mean they deserve cruelty. All beings deserve love!

Sign the petition to give all animals a second chance!
Sign Petition
SHAREShare this petition with friends!TWEETEMAILEMBED
Sign Petition
See more petitions:
You have JavaScript disabled. Without it, our site might not function properly.