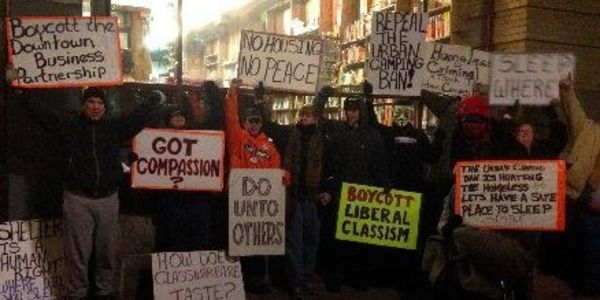 Tell the Denver City Council to Stop the War on Denver's Homeless!

In May 2012, the Denver City Council passed the Urban Camping Ban, which basically made it a crime to be homeless. Please sign this petition to demand that the Council get rid of this inhumane law!

The law bans people from covering themselves with anything and lying down anywhere in Denver. Far from reducing the number of homeless in the city, the ban has made homeless people less safe and more afraid. Many have abandoned sleeping in groups for safety because it makes them more visible to police. But people aren’t invisible, and those forced to sleep on the streets are often woken by police officers multiple times each night and told to “move on” or “sleep somewhere else.” The problem is that there is nowhere to move to and not enough shelter options.

When the Urban Camping Ban was passed, the Denver City Council promised that they would provide more shelter beds and a day center where people could shower, get new clothes, eat, and receive counseling for substance abuse issues.  However, these promises have not been met.

There was renewed hope that change would occur when new City Council members took office this year and promised to spend $1.5 million per month on desperately needed housing and shelter beds. All we got were more broken promises.

For three years, Occupy Denver and homeless advocacy groups like Denver Homeless Out Loud have been fighting the Urban Camping Ban on behalf of the estimated 6,000 homeless people living in Denver. In response, the police have arrested activists during protests for disturbing the peace, and placed restrictions on our right to feed the homeless.

We hope that the Denver City Council will follow through on its promises to provide more affordable housing and shelter beds, but they also need to recognize that being homeless is not a crime. Please sign this petition to demand that the Council repeal this inhumane law and restore homeless people’s right to live safely and with dignity.

If you care about the homeless who are facing the possibility of jail time for living on the streets in Denver, please sign this petition to make the city council repeal the inhumane and unjust Urban Camping Ban.  Its purpose has long been lost since the shelter beds and day treatment center promised have never materialized.  The City Council has now promised to allocate funds for affordable housing including shelter beds, but nothing has been started yet and homeless people are still afraid of being arrested and their possessions stolen.  Help stop the inhumanity.