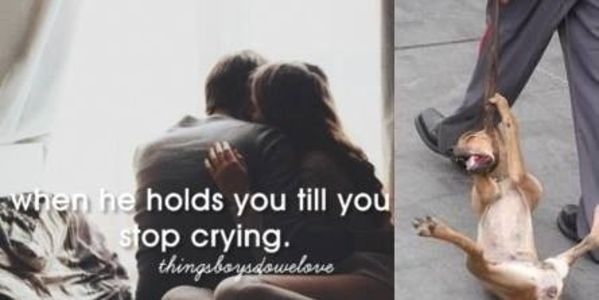 Tell Facebook to Remove Page Promoting the Mistreatment and Death of Dogs!

A Facebook page called "Dogs Suck", aimed at degrading dogs and the people who enjoy their company, was recently created in early August. This page frequently makes posts that promote the mistreatment and death of dogs, particularly pit bulls, and shares posts from other pages depicting cruelty to dogs (often about their death) while praising the animal abusers, often with the phrase "Hero Alert" regarding the offender. They also spread misinformation regarding dog bites and state breed legislation without citing reliable sources.

Dogs Suck has posted many graphic, disturbing images of dogs being mistreated, including dogs that are being hanged, dragged, trapped, thrown, and generally abused and neglected. One of these horrendous posts includes an image of a dead dog carried in a garbage bag, paired with the caption, "Trash day!" Some of their images are cartoons and edits taking a comedic approach towards the torture and abuse of dogs. These images include cartoons of dogs being beaten, and one photo depicts a pit bull-type dog with a knife sticking out of its face. Another edit shows a dog with a gruesome, massive wound in its neck with a PEZ candy popping out.

The page, along with its images, have been reported many times, but Facebook's team has refused to take action.

Tell Facebook that animal abuse should never be tolerated, promoted or ignored, and that pages that glorify the mistreatment of animals should have no place on their site!

I was very disappointed to learn that your team had not taken action against a page that promotes the abuse and death of dogs. The page "Dogs Suck" frequently creates posts that glorify the death and mistreatment of dogs, along with sharing posts depicting dog abuse while praising the abusive actions.

This page has posted multiple graphic images of dogs being abused, including ones who are depicting being thrown, hanged, dragged, and otherwise abused, and even dogs who are deceased. These images reside in the page's gallery along with cartoons that promote animal abuse. Some of their images have been edited for comedic effect, including a pit bull-type dog with a knife sticking out of its face. Many users have attested to reporting the page and its contents, but little action has been taken as a result.

Please set an example and let Facebook users know that animal abuse should never be tolerated, promoted or ignored on your website.Take action against Dogs Suck and remove the page and its contents. Thank you for your consideration.