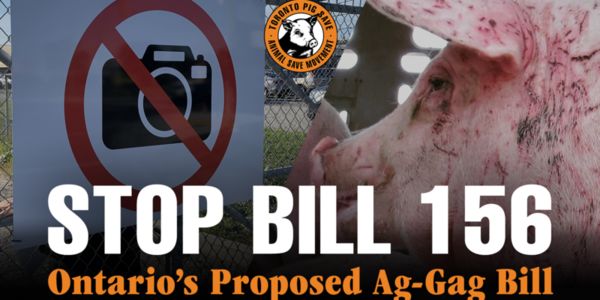 "When the suffering of another creature causes you to feel pain, do not succumb to the initial desire to flee from the suffering one, but on the contrary, come closer to him, as close as you can, and try to help him." – Leo Tolstoy

The Conservative government's proposed Bill 156 (Security From Trespass and Protecting Food Safety Act) is a dangerous piece of legislation that would hide animal abuse and prevent animal activists from performing their vital role in exposing the horrific treatment of farmed animals.

Ag-gag Bill 156 specifically targets animal rights groups like Toronto Pig Save and a dozen other Save groups in Ontario that are part of the global Animal Save Movement. Activists peacefully bear witness to farmed animals outside slaughterhouses, provide water to animals, and document their suffering. The bill:

"Prohibits interacting with farm animals being transported by a motor vehicle without explicit prior consent."
Subjects activists to fines, escalating fines of up to $15,000 for a first offence and $25,000 for subsequent offences, compared to a maximum of $10,000 under the Trespass to Property Act.
Prohibits stopping, hindering, obstructing or interfering with a motor vehicle transporting farm animals.
It would also require explicit prior consent to access an "animal protection zone" on a farm or "food processing" slaughterhouse facility. According to Animal Justice lawyer Camille Labchuk, the other things the bill does that should be concerning for activists include extending the time in which charges can be laid from 6 months to two years; allowing for civil actions to recover damages against activists; allowing farmers to recover full costs against activists in the case of private prosecutions against activists. The bill also lets the government designate other areas as "animal protection zones" which it will likely use in the future to designate labs, zoos etc.

Bearing witness at locations where animals are exploited, abused, and slaughtered is a Canadian right of freedom of expression. Activists have a right to interact with animals such as pigs, cows, and others on public property.

Bill 156 does not reflect the concern the majority of Ontarians have for farmed animals. This proposed bill must be stopped, and instead, the government should be increasing the ability of activists to expose exploitation and suffering of farmed animals.

Animal Save vigils are held at a dozen slaughterhouses in Ontario by the following Save chapters:

The government should be promoting the benefits of animal advocacy

Bearing witness at animal vigils helps participants and the public see firsthand the individuality of the animals and has helped thousands of people shift to a plant-based diet, as well as do their civic duty and get active in animal justice movements.
Animal vigils at slaughterhouses create mass awareness through viral social media.
Our vigils at Fearmans slaughterhouse have exposed pigs literally dying of thirst, heatstroke and heart attacks during extreme heatwaves. This Toronto Pig Save video has 19 million views, demonstrating the intense public interest.
At Toronto Cow Save vigils we have shared the painful injuries of cows arriving at slaughterhouses. In this video a cow arrives at the slaughterhouse after ripping his horn off during transport. Blood is streaming down his face. This video was reported to the Canadian Food Inspection Agency (CFIA) who responded that there was no evidence of a bloody cow arriving.

The government and law enforcement agencies should be aiding animal rights groups to reach safety agreements to bear witness peacefully - not taking away their rights and duties.

The proposed Bill 156 is likely to increase the risks of dangerous driving by, according to the government's news release, "increasing protection for farmers against civil liability from people who were hurt while trespassing or contravening the act." We fear this provision would enable and embolden transport truck drivers to drive aggressively, and endanger the lives of peaceful, law-abiding activists. There have already been numerous incidents of a significant minority of truck drivers putting activists' lives in danger. (See videos 1 and 2.)

Toronto Pig Save has successfully obtained safety agreements with Maple Leaf Poultry and St. Helen's in Toronto but not Fearmans (owned by Sofina) in Burlington, despite numerous attempts. See our letter and safety report re: Fearmans slaughterhouse. This legislation is dangerous and unjust. It will significantly increase the risk of death to activists. It must be stopped.

"One who knows the truth must bear witness of the truth to those who do not."
- Leo Tolstoy

In addition, the legislation could in effect shut down undercover exposés into conditions on industrial farms and slaughterhouses, in cases where activists seek employment without disclosing an intention to "blow the whistle" on cruel and illegal conditions.

The Ontario government similar to the Alberta Government is attempting to fast track Bill 156 right before Christmas, a time when many people may not be as engaged in the news. Ontarians have a right to know that animal rights activists rights are being infringed - and that this could happen to any other social justice movement in Ontario, at any time.

What you can do:

Sign the Animal Justice e-letter. "Ontario's attempt to cover up animal cruelty is absolutely chilling, and should be deeply disturbing to us all," said lawyer Camille Labchuk, executive director of Animal Justice.
Call and send a letter to your MPP. Ask to meet with them. List of MPP's (see talking points below) Click here to see the full proposed legislation.
You can stop these atrocities now by voting with your wallet by going vegan and BOYCOTTING the animal agriculture industry. STOP supporting this cruelty. Help shut down the most violent places on the planet! Switch to a whole foods, plant-based diet and live cruelty-free!
Join us in bearing witness to farmed animals at Toronto Pig Save and Animal Save Movement vigils across Ontario

Express deep concern regarding Bill 156, recently introduced in the Ontario legislature. This proposed legislation makes it illegal to bear witness to animals at vigils and to expose cruelty to farmed animals on farms, in transport and at slaughterhouses.
Increase risk of injury or death to activists bearing witness.
Bill 156 is disturbingly similar to so-called "ag-gag" laws passed in several U.S. states, which have been struck down by courts in Idaho, Utah, and Iowa as unconstitutional.
Ask your MPP to oppose the legislation.

Please support our work by visiting our website www.animalsavemovement.org