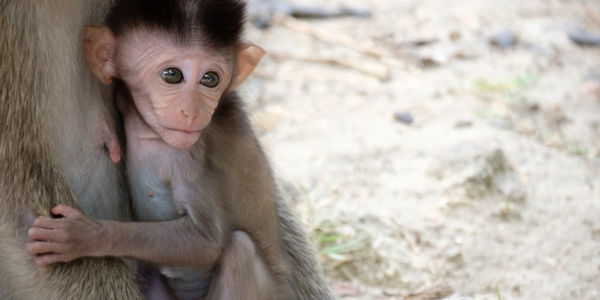 In the video, things start out sweet. A baby macaque appears on camera, and someone reaches in to hand-feed the young animal from a bottle. But the first warning sign is the caption text, which stated that the videographer was "feeding the baby monkey to make sure he [didn't] run away."

Then, a large dog enters the scene, aggressively lunging at the baby monkey and biting it over and over. For nearly nine minutes, the dog attacks the little creature, who desperately holds onto its milk bottle and later tries -- unsuccessfully -- to run away. As the dog repeatedly bites and catches the monkey, it screams in pain.

Then the person who filmed the video uploaded it to YouTube. And YouTube allowed this disturbing content to remain up on the site for almost a full month, collecting views and money for YouTube. The corporation finally removed the video after Newsweek flagged it as graphically violent.

YouTube states that it will not permit "violent or gory content intended to shock or disgust viewers," "content encouraging others to commit violent acts," or "videos that show humans maliciously causing an animal to experience suffering" on its site, but that's clearly not true.

If a prominent media organization had not reached out to YouTube, would the video have been taken down yet? Or would it still be up online, circulating, gathering likes, and allowing people to delight in the torture of a young, innocent monkey?

Unfortunately, this gruesome video is not the only one of its kind on the platform. In fact, YouTube is even facing a lawsuit over its consistent failure to quickly take down videos of animal cruelty and abuse. Such content not only hurts the animals involved, but it can also encourage sadistic copycat videos -- meaning more animals will be abused in the future. Even worse, it normalizes this type of behavior, making it seem acceptable to intentionally harm innocent creatures. And, on top of that, for every animal torture video that YouTube allows on its platform, the company makes money.

YouTube obviously must do more to protect animals. There can be no place for videos like this one -- in which a baby macaque is attacked at length -- on YouTube. The social media corporation must stop monetizing animal abuse and must implement stricter standards to take down such heinous videos!
Sign Petition
SHAREShare With FriendsTWEETEMAILEMBED
Sign Petition
See more petitions:
You have JavaScript disabled. Without it, our site might not function properly.