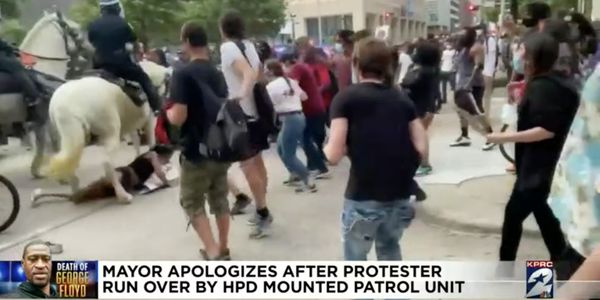 Police Are Endangering Animals and People Alike By Bringing Dogs and Horses to Protests!

Every state in the U.S. has now been home to peaceful protests demanding an end to police violence against Black bodies, spurred by the murder of George Floyd. But at many of these gatherings, protesting police brutality has incurred even more police brutality. New, shocking footage emerges every day -- police cruisers driving into crowds of people fleeing. Officers surrounding, trapping, and then pepper spraying peaceful protesters with their hands up. Decked out in riot gear, cops shoot rubber bullets, which can be fatal, at people's heads. But some of this footage reveals another layer of depravity -- police forcing innocent animals, who have no choice in the matter, to perpetrate violence against protestors.

Sign to demand that all 50 states pass legislation to ban the use of police horses or dogs at protests!

In Houston, Texas, a woman named Melissa was peacefully protesting when she was hit and then trampled by a horse. In footage of the incident, the horse appears startled and in distress directly after the incident -- it had, of course, not chosen to crush Melissa. The horse had been spurred on and directed by the police officer riding it. In California, a young protestor named Joseph Malott was attacked by a police dog during a protest, sustaining painful injuries. In Walnut Creek, California, a SWAT team used police dogs to chase and intimidate protesters. These animals are being forced to carry out police brutality against their own will.

These dogs and horses should be in loving homes, living as companions and family members, not in dangerous situations that are becoming increasingly warlike due to police escalation. If these animals were really their "partners," why would officers create such deadly situations and then put these animals in the midst of such danger where they could be hurt or even killed?

The use of police animals at protests is not only dangerous for animals and protesters alike, it is extremely tonedeaf. You have likely seen the images of Birmingham, Alabama on May 3, 1963 depicting Black civil rights demonstrators being held still so that police dogs could easily and viciously attack them. The firehouses that tore through crowds of Black demonstrators back then may have been replaced with rubber bullets and tear gas, but the history of using innocent dogs to attack innocent people has carried right into 2020.

Trump himself knew what he was doing when he conjured these images, claiming that anyone who breached the White House fence during the protests "would have been greeted with the most vicious dogs."

This is unacceptable. Police brutality is a deeply-rooted issue that will take immeasurable time and effort to solve. But we can protect the safety of protesters and innocent animals NOW by urging every state across the U.S. to ban the use of horses and dogs at protests. Please sign the petition today!
Sign Petition
SHAREShare this petition with friends!TWEETEMAILEMBED
Sign Petition
See more petitions:
You have JavaScript disabled. Without it, our site might not function properly.

Care2
Police Are Endangering Animals and People Alike By Bringing Dogs and Horses to Protests!
SHARETWEET