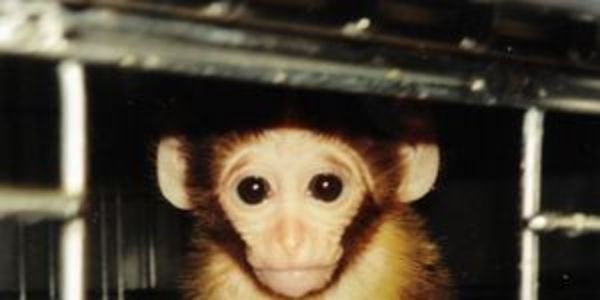 Baby Monkeys to be Tortured and Killed for Sadistic "Study" - Protect Them!

Over 50 years ago, scientists at the University of Wisconsin-Madison performed horrifically cruel psychological “experiments” on infant rhesus macaques. To induce mental illness in the monkeys, newborns were torn away from their mothers at birth and raised in complete isolation. The only result of the research was — not surprisingly — that maternal contact is important for early development.

Most people think that these barbaric experiments are a relic of the “dark ages” of psychology, but, shockingly, the University of Wisconsin-Madison continues to conduct them today.

The latest experiment to be approved by the university is a project by Dr. Ned Kalin, who has been torturing and killing monkeys for over 18 years. Over the past ten years alone, his sadistic, outdated research has cost taxpayers over $5,075,798.

Because Kalin researches stress and fear, his experiments are deliberately designed to cause pain and terror in his subjects. Some of his previous experiments include cutting open macaques' skulls to burn away parts of their brains with acid, restraining the animals to a chair to inject chemicals into their brains, and putting the monkeys in a “shuttlebox”, a cruel device where the animals “shuttle” back and forth in futile attempts to avoid electric shocks.

Now, he says that he has gone as far as he can in his study of anxiety in "normal" monkeys. For his new study, he desires to traumatize 20 infant rhesus macaques as much as possible to create the ultimate fearful test subjects.

To do this, female macaques will be physically restrained as their babies are taken from them within 24 hours of birth – the first maternal deprivation study performed at the university in over 30 years. For over a month, the infants will be raised alone in a shoebox-sized incubator with nothing for comfort but a “surrogate peer”, a cloth-covered inanimate object. Surrogate-peer-rearing is widely acknowledged to cause heightened anxiety in young monkeys. At approx. 2 weeks of age, while still being kept completely alone, they will be removed from their incubator and begin regular exposure to various frightening stimuli, including human intruders, unfamiliar monkeys, and their worst, most innate fear – live snakes.

Monkeys forced to undergo similar procedures in previous experiments were often observed crying out, cowering, and clutching the back of their cage in fear.

After each frightening “procedure”, the infant will be forced to undergo stressful and painful medical tests, including PET and MRI scans, blood collections, spinal taps, and skin-punch biopsies.

To inflict as much emotional trauma on the infants as possible, at six weeks of age, each baby monkey will be paired with another infant who has also been isolated and frightened. From then on, whenever the infants are to be exposed to frightening stimuli, they will be deliberately separated from their only companion in an attempt to ensure that they are suitably traumatized while their brains are developing.

After many more rounds of frightening experiences and painful tests, the baby monkeys, along with 20 mother-raised monkeys of the same age, will be given a lethal injection before their first birthday.

Their brains will be cut out and studied by Dr. Kalin, who says he hopes to see differences between the brains of the traumatized monkeys and the dissected brains of “normal” baby monkeys.

But no matter what Kalin “discovers” in his archaic and cruel study, it will not cure the trauma suffered by human children who are abused and neglected. The school’s bioethicist, Robert Streiffer, is against the study, saying that he “wasn’t convinced that we will learn anything useful” from the animals' suffering.  Even a former UW-Madison primate researcher has admitted that "many findings from behavioral and biochemical studies in monkeys and other animals are not replicated in humans." And the members of UW-Madison’s committee responsible for approving animal research studies have expressed severe reservations, spending an unprecendented 170 hours debating the ethics of the experiment.

Despite this, committees at both UW-Madison and Dane County, where the school is located, have voted to allow the sadistic “experiment” to go forward as scheduled!

It is shocking that such an archaic study has been given the green light, despite significant public outrage and opposition. Deliberately torturing infant monkeys in outdated “experiments” is a practice which simply has no place in the 21st century. This study will waste critical research funding and subject nonhuman primates to unnecessary pain and suffering for negligible human benefit.

Signing this petition will send a clear message to UW-Madison – torturing baby monkeys for “research” has no place in modern science, and using taxpayer dollars to fund the abuse is unacceptable.

These helpless infants cannot speak for themselves. We are their voice. Please sign to ask the USDA to investigate the approval process and hopefully stop the experiment!

I was shocked and outraged to learn that the University of Wisconsin-Madison has approved Dr. Ned Kalin’s study, “Effects of early experience on the development of anxiety and its neural substrate”. For the study, Kalin will conduct cruel and outdated maternal deprivation experiments, in which infant rhesus macaques will be taken from their mothers at birth, raised in isolation, and then subjected to terrifying and often painful experiments to exacerbate their symptoms of mental illness. At the end of the study, the infant monkeys will be killed at the age of one so that their brains can be studied and compared with those of mother-raised infants.

While animal research can be useful at times, these unethical and contrived maternal-deprivation experiments have been repeatedly proven to have little relevance to human mental health. I am outraged that my taxpayer dollars are being wasted on such cruel and archaic experiments when the funds could be used for more relevant and critical research.

Deliberately torturing infant monkeys in outdated “experiments” is a practice which simply has no place in the 21st century. This study will waste critical research funding, subject nonhuman primates to unnecessary pain and suffering for negligible human benefit, and tarnish the reputation of UW-Madison as a professional institution.

I demand that the USDA immediately investigate the approval process of Dr. Kalin’s outdated and inhumane study and command the University to redirect the funds toward modern, human-relevant research projects.

Care2
Baby Monkeys to be Tortured and Killed for Sadistic "Study" - Protect Them!
SHARETWEET