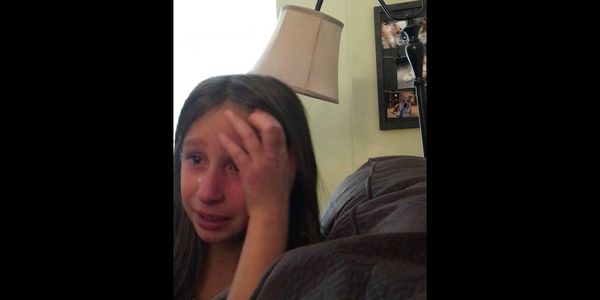 At Sarge's first vet appointment, the vet decided that Sarge, our new puppy, looked like a Boxer X.  Sarge was being trained by one of the best K-9 handlers my family has ever known, the children's dad. Two years later the family moved within Aurora to an apartment complex after the house we where renting was going to be sold. This new apartment complex allowed our dog Sarge with no issues or trepidation.

In January I had Sarge at the community dog park and an older female in a winter coat was there with her dog. As Sarge ran into the park, I called out to this older female and stated "Sarge has a lot of energy, he just wants to play....his tail is wagging." I made this comment knowing that some dog owners  and dogs, might not be good with other dogs. This older female in a winter coat started yelling and cursing at me to get my F*&K'ing dog. While this female was calling out and yelling, she was also reaching down to try to push my dog out of the way, putting herself between Sarge and her own dog. The dogs finally ran off and the lady in the winter coat stated "you see that!? My dog is terrified! You need to control him!" At this point in our adventure to the dog park, I can assure everyone who might be reading this, that Sarge didn't do anything different than any other excitable two year old dog. When the dogs arrived back at the main gate where the woman in the winter coat and I where arguing, each dog respectively found their owner and sat next to them panting. This older woman grabbed her dog and started pulling it out of the park, but not without threatening that she was going to call Animal Control and have my dog removed. I asked this woman why my dog would be taken away, the woman in the winter coat replied with a question, "What kind of dog is that!?". Instead of responding to this older woman, I simply stated "Call em".

Weeks later Aurora Animal control came to my apartment seizing Sarge stating he was a vicious, dangerous and aggressive dog. The patrolman stated that the woman in the winter coat is claiming Sarge bit her.  I know this bite never happened, as this woman never made any sort of remark to that affect at the park that evening. I was pondering how a woman would get "attacked" by a dog and not make any mention of such an attack at the time. I was able to view this woman's "bite" via blurry pics she had taken herself. The alleged "bit" was clearly a scratch, perhaps self inflicted? The patrolman pulled Sarge out of my apartment and threw him in quarantine for 10 days where Sarge was unable to get out to go to the bathroom, or exercise. As a veteran, I was expecting Animal Control to ask about whether he was a support dog, that question never crossed the patrolman's lips.

Sarge became subject to many tests, one of which was a 'visual identity test' where three shelter employees have a chance to give their expert opinion on what they think a particular dog is. These employees often have no degrees and in some cases aren't even high school graduates. Sarge was determined by these individuals to be a Pit Bull, I was ordered to pay a $210.00 DNA test at this point to clear Sarge of being a Pit Bull.

At this point the reason Sarge was taken still has not been acknowledged. I have now spent over $2000.00 in lawyers, court fees and kennel charges unrelated to why our family pet was taken from our home. I believe, at this point, Sarge has been proven guilty of being a Pit Bull as well as having bit the woman in the winter coat due to the way he looks. Does this situation remind you of anything?

On the second court date I was summoned to, the prosecutor as well as my lawyer advised  me to wrap this whole debacle up by paying $300.00 and plead to having an aggressive dog. I promptly asked why I would do such a thing, as we haven't even taken the older woman to court in order to prove Sarge's innocents. My lawyer stated that I could pay $1000.00 and plead guilty to having a Pit Bull in Aurora. "So" I stated "it costs more to have a Pit Bull fine in Aurora, then in does to have an aggressive animal!?"

Sarge was able to come home to his family with some mild quirks. Sarge now had to sleep with me or one of his kids at bedtime, otherwise he would pace and cry all night. Sarge was able to come home with restrictions. Please remember, that at this point, Sarge still hasn't been proven to have attacked or scratched anyone. After all the money we spent, all the time in quarantine, and now many restrictions that are required, Sarge continues to be punished while the woman in the winter coat has had no repercussions for her ignorant and deceptive behavior.

The court ordered me to get a blood test on Sarge, which turned out to show Sarge was 100% Staffordshire Terrier. My lawyer advised me to let this situation go and to move out of Aurora. I felt bitter about what my family and Sarge had just been through. I was running out of money to spend on the retainer my lawyer required.  My family now needed to start saving money in order to move.

On 05/16/2016, there was a knock at my front door. The patrolman from animal control was at my doorstep once again. I assumed this man was checking up on Sarge and following up on the restrictions the court had instated. As the patrolman entered our apartment, Sarge ran to him with excitement, as Sarge had recognized him from their previous encounter. As the patrolman informed me that he would be taking Sarge back to the kennel, Sarge sat intently at his side with his tail wagging, nudging his hand to pet him. I was told that one of my neighbors had taken a picture of me with Sarge outside without his muzzle, (court ordered).

Sarge is our family pet and has never been aggressive or attacked anyone. Sarge is now being ripped from our home because the city doesn't like the way he looks. My family, to include Sarge, are being punished for coming across the woman in the winter coat. No action actually took place to warrant the drama and suffering this woman has caused my family.

The laws in this city do not take into account situations like mine, nor does it take into account Sarge's imaculate behavior. Sarge was born into his life, as we all have been. Sarge should not be taken away from his family and look forward to potential euthanasia because of an archaic rule based on looks. Please help!