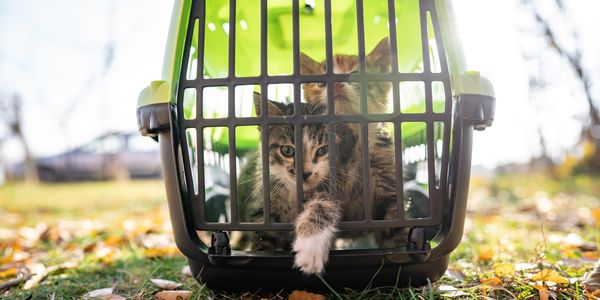 Someone locked this mama cat and her kittens in a carrier and threw them into a dumpster!

A poor cat who had recently given birth to a litter was discovered locked in a crate with her babies -- all of whom had been discarded in a dumpster.

Demand that the Pennsylvania State Police find whoever did this, and make sure they never have access to animals again!

Tragically, the kittens and their mother were all dead by the time they were found -- with the exception of one kitten which had to go through the unimaginable trauma of watching all of her littermates and mother die around her in the tiny cage. It was rushed to a rescue shelter where vets tried to save its life, but eventually the poor thing also died.

Although authorities and local shelter employees alike acknowledged that shelters in the area are overwhelmed with animals, abandoning pets to a slow and painful death is never the answer.

This person should have at the very least spayed this mama cat so that she wouldn't have had a litter of babies that the owner couldn't handle. They could have reached out to the many shelters or vets in the area, asking for options. They could have explored their network of friends, family, or any of the many animal welfare organizations and groups with social media presences, asking if anyone could foster this sweet cat family. Instead, they locked these little furry beings together in a tiny space and put them where no one could find them in time to save them.

Luckily, the cat carrier was labeled with a name, which gives authorities a clue as to who might have dumped these cats. Please sign the petition asking that Pennsylvania officials take immediate action to find the humans responsible, and make sure they have no other pets, now or in the future, that they can harm!

Let's also encourage local authorities and organizations to spread awareness of the need to spay and neuter pets so that this doesn't happen again, and so that shelters aren't as overwhelmed.

Care2
Someone locked this mama cat and her kittens in a carrier and threw them into a dumpster!
SHARETWEET