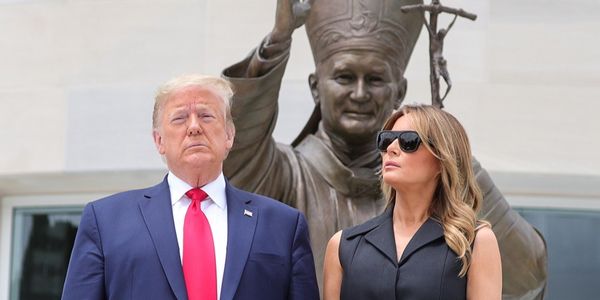 Urge Knights of Columbus Leadership to Confront Evil of Racism

Since Memorial Day and the violent death of George Floyd in Minneapolis, the United States has been reckoning with "the evil of racism in our land," as the United States Conference of Catholic Bishops (USCCB) has called it. Protests have erupted across the country. The USCCB has affirmed that it "stand[s] in passionate support of communities that are understandably outraged."

During your own homily on Pentecost, you implored Catholics to "ask the Spirit to shake our house - to shake us out of complacency over the pandemic of racism and to fill us with fiery determination to defeat this heresy and sin, and to do so with the truth and love of Christ."

On Tuesday, June 2, you had an opportunity to put your words into action and did not.

The Saint John Paul II National Shrine, which is run by the Knights of Columbus (on whose board you serve as Supreme Chaplain), hosted President Donald Trump for an event on religious liberty. The night before, President Trump authorized the tear-gassing of peaceful protesters outside St. John Episcopal Church and then forcibly removed the Christian ministers serving at their Church, in clear violation of their religious liberty. All this so the President could take a photo.

We echo Washington Archbishop Wilton Gregory, who responded to the President's invitation at the Shrine as "baffling and reprehensible." How can "any Catholic facility ... allow itself to be so egregiously misused and manipulated in a fashion that violates our religious principles, which call us to defend the rights of all people. ... [St. John Paul II] certainly would not condone the use of tear gas and other deterrents to silence, scatter or intimidate [protesters] for a photo opportunity in front of a place of worship and peace."

While the June 2 event may have been scheduled before the killing of George Floyd and President Trump's egregious treatment of nonviolent protesters and St. John's Episcopal Church, our faith obliges us to read the "signs of the times" to ensure that we are standing in solidarity with the poor and marginalized, not those in power.

By not rescinding the President's invitation, the Knights of Columbus allowed the Catholic Church to be used as a theatrical backdrop for partisan gain and aggravated the deep wounds that caused these protests in the first place.

Archbishop Lori, instead of "shaking up our house," you have allowed it to be co-opted in the service of self-aggrandizement and injustice. We call on you, as the Supreme Chaplain of the Knights of Columbus, to acknowledge the deep hurt your organization has caused.

While we urge you to issue an apology, it is also important to acknowledge that the Knights' decision on June 2 is part of their long history of complicity with prejudice and institutional racism: for example, that the Knights did not admit African Americans during the era of Jim Crow or that no person of color currently serves as a Supreme Officer of the organization.

The Catholic Church always has an obligation to atone and make amends for its participation in institutional racism, and this is especially true now. To this end, we urge the Knights of Columbus to commit to engaging in an internal process of healing and reconciliation with its racist legacy. Other Catholic institutions have led the way on this, including Georgetown University and the Sisters of the Sacred Heart.

During this moment in our national history, the Spirit is calling on each of us to "defeat this heresy and sin" of racism. We call on you to put your own words into practice. Otherwise, we, as people who have faith in a God of justice, risk becoming "the hypocrites, who love to stand and pray in the synagogues and on street corners so that others may see them. Amen, I say to you, they have received their reward" (Mt 6: 5).