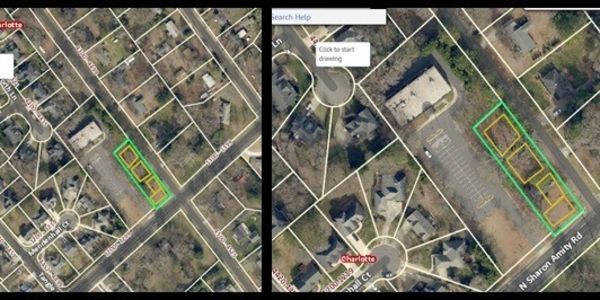 Residents of Cotswold, Oakhurst, Sherwood Forest and the surrounding neighborhoods are asking the Charlotte City Council to request a reduction in the number of homes in petition 2019-141 by a single unit to bring the density down to three homes instead of four before approving. If the site plan is not changed, we are requesting the petition be denied.

The four-home plan on the .435 acre lot on the corner of Castleton and Sharon Amity would increase the existing R-3 to an R-10... more than three times the existing. At .10 of an acre per home, it would also be more than double the density of any surrounding properties with the smallest around .25 of an acre or R-4. Allowing this monstrous jump in density will set the measuring stick for all future petitions, especially the 1.65 adjoining acres currently zoned for institutional use but that has a conditional designation of R-12 (CD).

In its current state, the adjoining lodge property can ONLY be used for institutional. The R-12 designation does not allow for 12 homes per acre with the CD limitation. Despite that fact, it is already being used as a measure and reason the proposed petition is going to be approved by the council, according to the district rep and developer. To use such an ambiguous zoning that doesn't currently allow for 12 homes per acre, is not even for sale nor has been presented for rezoning to even allow for one home is not only illogical, it's irresponsible.

The area cannot handle the additional traffic, runoff, strain on services, impact on schools and the downstream effect of future petitions that this four-home plan will surely cause. The statements that it would not be used are negated by the fact the R-12 (CD) is itself being used as a measure.

Not even a year ago, the council denied a petition for the same number of homes on a slightly larger lot. These two petitions are identical in nature with the same issues facing them. The two lots are only 0.6 miles from each other. If four homes on .52 of an acre half a mile away on the same street, also on a blind corner of Sharon Amity was not viable, it is not viable in this instance either.

Reducing the homes to three would still be a large increase in density bringing the average lot size to .145 each. That is doubling the surrounding homes and increasing the zoning from an R-3 to an R-7. That is reasonable growth. Growth that will help this very desirable area of Charlotte grow responsibly with the minimal amount of negative impact.